Take a look at this disgusting meme, designed to show that “Jesus” is a major hoax: 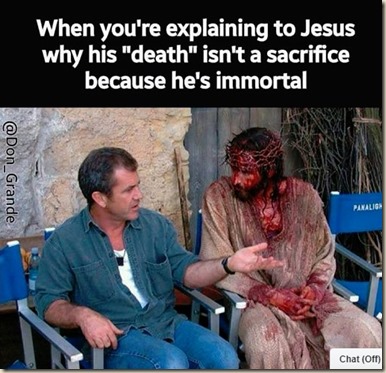 First and foremost: I don’t think anyone has to “explain” anything to Jesus!  The arrogance of counter-missionaries is unbelievable!

Perhaps someone should tell these geniuses that Yeshua Mashiyach wasn't a "sacrifice" - he martyred himself, against which there is no law!

Yeshua (who is referred to as our "Passover Lamb") was "predestined" - it says so in Isaiah 53; and Matthew 16:21 shows Yeshua knew his fate. A proper reading of the Brit Chadashah (NT) reveals Yeshua's "sacrifice" did NOT cover "all sins" as Christianity teaches (Romans 6), but that redemption is only for those who accept Yeshua's gift and obey YHWH (John 17:1-17), and live by the Word.

As stated above, the "Passover Lamb" was NOT a "sacrifice" but a "substitute." During the original Passover, the "angel of death" passed over the believing Hebrews when the lamb's blood was on their doorposts.

So, though not a "sin" sacrifice, the lamb's blood was offered as a substitute, giving the Hebrew first-born males a chance to live. This is the connection: Yeshua was our SUBSTITUTE - and by believing and following YHWH's Torah to help us to lower our tendency to sin, and do our best to NOT sin anymore, we have the chance for eternal life.

And this, of course was the point: Eternal life. Yeshua did not die so we were "free to sin at will", He died to offer us (eternal) life. Indeed, this was the purpose of the animal sacrifices for atonement - a chance to be cleansed from their sins so they could be considered "clean and holy" enough to be in YHWH's Presence. When a person was atoned by the blood of an animal, they were expected to go on with their lives trying to remain sin-free. The situation is no different with the Messiah.