Ready for a Messianic psycho-thriller?

"Satan just walked through the door!"

And she was right. Not only did Rex end up wreaking havoc in the congregation, but he also devastated the leadership, caused some to lose their faith in God, and even managed to destroy the Rabbi's marriage.

Making matters worse, his very presence caused "flashbacks" for the forty-something Becca - flashbacks to a childhood fraught with unspeakable horrors at the hands of her demented father, Klaus-Dieter Behringer, a former prison guard at the Bergen-Belsen Concentration Camp, who had a few sinister "skeletons in his closet."

Set in the beautiful countryside near Seymour, Missouri, "Destroyed from Within" is an intense, fast-moving psycho-thriller revealing how the "sins of the father" are passed along from generation to generation while depicting the many ways in which weak faith and poor leadership can lead people completely away from God.

Ready for this Messianic psycho-thriller? It's called, "Destroyed from Within" - and you can find it either at Amazon.com, or at this link where all of my books are displayed. 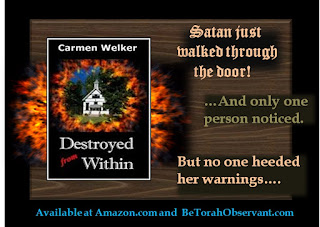