Santa Claus is a lie, period! And lying is a sin…. 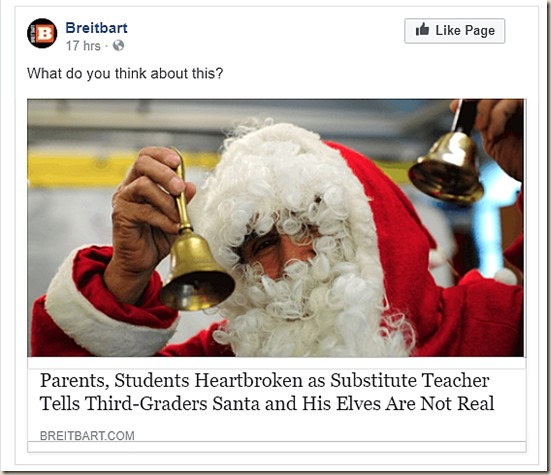 I’m going to preface this by saying that it’s not my problem if people choose to celebrate Christmas, a “holiday” that masquerades as one of God’s Holy Days. I would just hope that, unlike “the world,” the Believers who do celebrate Christmas, keep in mind that it’s supposed to be all about Jesus and not some mythical being that has been made the center of this entire season…

Having said that, I HAVE to say something about this issue, because it made me sick to my stomach to see the myriad comments on this viral thread, in defense of the lie that is “Santa!” One woman’s response to this Breitbart post (and she had tons of people agreeing with her!) was: “I just tell my kids that when people say that, Its [sic] because they only ever got coal in their stockings and Santa doesn't like them.”

In other words, she doesn’t mind telling one lie to cover up another. Obviously, she’s not a Believer, or else she would know that lying is a SIN!

This issue “hit home” with me because I clearly remember how deceived I felt at the age of five, when my foster mother told me there was no Santa Claus. I couldn't believe my foster parents had LIED to me all this time! I had, by that time, already been reading fairy tales, and KNEW they weren't "real" - but every year I was told that "Santa" was! After that, I never completely trusted them, again - nor any other adult, for that matter….

Okay, so here is my opinion on this issue, point-for-point:

(1) That teacher had no right to do what he did. That's not a teacher's job.

(3) It's pretty sad when 8 or 9-year-olds still believe in the myth of "Santa" because they should have been told way before then. It's one thing to allow children's imaginations to grow; and, in everything else EXCEPT with "Santa" we actually TELL our children "it's just make-believe."

But Santa is different. We INSIST that this mythical entity "knows when you've been naughty or nice." (Isn't that GOD's job?) And we INSIST that "Santa won't bring you any presents unless you've been good." What a HORRIBLE thing to do to children to have them keep in the back of their minds all year long, that they have to be "good" because Santa Claus is watching! Where does that leave God, and what doe HIS Word say about “idols” and “other gods?” (Leviticus 21:6, Ezekiel 16:20, 36; 20:24; 23:30, 2 Kings 17:12, 41, etc.)

Ezekiel 14:3 "Son of man, these men have set up their idols in their hearts and have put right before their faces the stumbling block of their iniquity Should I be consulted by them at all?

Jeremiah 1:16 "I will pronounce My judgments on them concerning all their wickedness, whereby they have forsaken Me and have offered sacrifices to other gods, and worshiped the works of their own hands.

Isaiah 2:8 Their land has also been filled with idols; They worship the work of their hands, That which their fingers have made.

Psalm 106:36 And served their idols, Which became a snare to them.

Revelation 9:20 The rest of mankind, who were not killed by these plagues, did not repent of the works of their hands, so as not to worship demons, and the idols of gold and of silver and of brass and of stone and of wood, which can neither see nor hear nor walk;

(4) And, last, but not least - what does "Santa" have to do with the birth of the "Christ Child?" Christmas is supposed to be ALL about the birth of Jesus (who - according to Scripture - wasn't born in December, but on the first day of Sukkot/Tabernacles, which happens in the Sept/Oct time frame on our Gregorian calendars).

The Three Wise Men didn't stand around to exchange presents; they brought them ONLY for the baby Jesus – and that didn’t even happen until two year later, when they finally reached him! So, why give presents to each other (with many going into debt to do so, which is another thing that goes against Scripture - Romans 13:8, Psalm 37:21, Proverbs 28:8; Matthew 25:27, Leviticus 25:35-38).