Here is what it was: It was an entirely predictable and understood, common total lunar eclipse, always worth watching if you happen to be in a cloud-free place where it is visible. Here’s a shot of the Jan 31, 2018 lunar eclipse as the fully-eclipsed moon was setting. 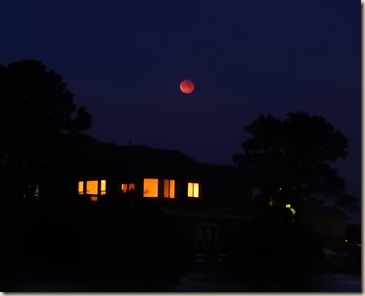 According to the media hype, a “supermoon” is rare, and during a supermoon it “will appear larger and brighter”.  Not so fast.  First, the term “supermoon” itself is bogus having been coined by astrologer Richard Nolle in 1979. (Notice I said “astrologer”, not “astronomer”! In fact, Mr. Nolle claims he is a “professional” astrologer, happy to sell you his “World Forecast Highlights” each year for a modest $75.)  Mr. Molle is very proud of the fact that his term “supermoon” has been assimilated by the media and by astronomers and is now in common use.  But here is what a “supermoon” is and what it isn’t:

Mr. Nolle decided that the term “supermoon” would apply when the moon is in-line with the sun and earth (that is, the moon is at “new” or “full” – called “syzygy”) while it is near its closest point to the earth (a distance called “perigee”).  Mr. Nolle decided that the moon must be “within the 90th percentile” of perigee when the moon is new or full to be called a “supermoon”. (There’s no real reason for the 90th percentile, but he invented the term, so I guess he gets to decide.) Mr. Nolle goes on to say that “a supermoon is a type of extreme lunar alignment” which he argues gives the moon superpowers of sorts. He says the effects of a supermoon include: “We feel it in ourselves – some of us more than others – and we see it in the people around us. There’s an intensification of emotionality, for better or worse.”  (Oy vey!)

The media, and Mr. Nolle love to point out that a “supermoon”, since it is closer to the earth, will appear bigger and (in the case of a full moon) brighter than usual.  The common numbers usually provided are “14% bigger” and “30% brighter”.  People are encouraged to go out and look at the “extra large and extra bright" full moon”.  Don’t waste your time. While the statements are true that the full moon does appear “bigger and brighter” when it is a supermoon, the average person will be hard pressed to recognize any difference from any other full moon.  Indeed, the numbers, 14% larger and 30% bigger, are compared to a full moon which happens when the moon is the farthest from the earth (i.e., at apogee)!  When at apogee, it is (unfortunately, sadly) known as a “micromoon”.  But no one ever informs you when a micromoon happens.  Have you ever heard any talking head, …er…, journalist say “This month’s full moon will be the smallest and faintest full moon in a long time…”?  So you have probably never seen a “micromoon”, or at least known of one.  To make it even more difficult, supermoons and micromoons happen many months or years apart and to actually discern the difference in appearance between a supermoon and a micromoon, you would have had to observe them when the moon was near the horizon so you could visually compare the apparent size of the moon while it was observed near objects of fixed size such as distant homes, buildings, trees or mountains.  That’s the only time when a skilled observer could comprehend the visual difference in the apparent size between a supermoon and a micromoon.  Otherwise, when a full moon, any full moon, super or micro, is up in the sky, it looks the same to you every month.  The visible size difference is described by astronomer Neil DeGrasse Tyson as “about as ‘super’ as a 16-inch pizza compared to a 15-inch pizza.

And finally, what about the “rarity” of a supermoon?  Well, it’s not all that rare.  1st, the moon is closest to the earth at some point every month. But the term, supermoon, is only supposed to be used when the moon is near perigee when the moon is new or full. So it certainly makes a supermoon less frequent than a full moon. Supermoons occur around every 14 lunar months yet supermoons often happen multiple times in a calendar year such as what we just saw with the present supermoons of November and December, 2017, and January 2018.  The previous trio of full-moon supermoons was October, November, and December 2016 and the next full-moon supermoons are January, February  and March 2019.  So your next “rare” supermoons are only 12 months away!

The media is quick to inform you, as they did this time (January, 2018), that a “blue moon” means a second full moon in the month.  But the media is wrong. That meaning is only a popular myth.  The reason for the erred meaning of “blue moon” is due to an error originally made by amateur astronomer James Hugh Pruett (1886–1955). He misunderstood the basis for determining the seasonal “Blue Moon” and wrote that a blue moon was the second full moon in a month  - published in an article in Sky & Telescope magazine in 1946. The term actually refers to the third full moon of four in the astronomical season and has nothing to do with calendar months. (An astronomical season should ordinarily have only 3 full moons.)

If the world operated on the Biblical, Hebrew, calendar, it would be ludicrous to talk about a “2nd full moon in a month” because in the Biblical calendar that is simply not possible. (Full moon is always in the middle of the Hebrew month.)  But the world uses the civil, Gregorian calendar which pays no attention to the moon, so with months of 30 and 31 days, it should come as no surprise that there can be two full moons in a month since the moon’s “month” averages 29.5 days.  That still does not make it right that the term “blue moon” has come to mean the 2nd full moon in a month because the proper term for “blue moon” works in any calendar because the term is associated with seasons, by the sun, and not the moon.  Shame on the media for perpetuating myth and not educating.  At least one journalist I read came close.  He wrote: “Yes, the blue moon thing is dumb”, unfortunately, he went on to justify perpetuating the myth.

It is this term that raises my hackles the most. Only in our modern world has a total lunar eclipse become known as a “blood moon”. (Simply writing the term makes me shudder!)  The term was popularized in 2013 when sensationalist Christian pastor John Hagee wrote a book about the 2014-2015 series of four total lunar eclipses.  A series of four, total lunar eclipses is called a “tetrad” and sensationalist Hagee (and others) cashed in on the tetrad to offer predictions of gloom and doom of the “Biblical end times”.  To add dramatization to this swill, Hagee (and others) employed the term “blood moon” because the term “blood” and the term “moon” are used in the same sentence 3 times in the Bible (Joel 2:31, Acts 2:20, and Revelation 6:12).  Here is the verse as found in Joel:

“The sun will be turned into darkness and the moon into blood before the coming of the great and terrible Day of Adonai.”

Needless to say, Hagee (and others) capitalized on the term “blood moon” and the (then pending) tetrad of total lunar eclipses to, well, to sell books.  At that, they were very good. At real astronomy, they were not so good. But I’m quite sure they sold millions of books.

A total lunar eclipse is not visible just everywhere on earth.  To witness the moon passing through the earth’s shadow means the moon must be above your horizon at the time.  That means not all places on the earth can witness a lunar eclipse when one happens.  The “big deal” hyped by Hagee and others about the 2014-2015 lunar eclipse tetrad was that the eclipses happened on the High Holy days of Passover and Sukkot in Israel!  Really? Let me tell you a little secret about lunar and solar eclipses.  If you can’t see them, as far as you are concerned, they didn’t happen.  For an astronomical event to have any significance in Israel, it must have been observed in Israel. If they did not see it there, then they would never have known it happened. (Today, of course, everyone all over the world knows when an event happened, but we are not talking about simply knowing something happened. In ancient times, if the eclipse was not seen, it didn’t happen.)  And I hate to tell Hagee and company, but none of the eclipses of 2014-2015 were visible in Israel. (In actuality, the 4th eclipse, September, 2015, began while it was visible from Israel, but the moon set before it became a total eclipse.)

A total lunar eclipse is also rarely “blood” in color.  The color of a total eclipse depends on the conditions of the earth’s atmosphere at the time. A “dirty” atmosphere will mean a darker, reddish-orange color.  A “clear” or “clean” atmosphere will provided a bright, peach color. A total eclipse can be a great number of shades of “peach” from bright peach to ruddy peach, or it can be as dark as rust.  I remember the total eclipse of July, 1982 – at mid totality it appeared so dark, ruddy rust that it was next to impossible to even see in the sky!  It was magnificent!

So a total lunar eclipse is not a biblical “blood moon” and I will thank the media to refrain from referring to one as such!

Nevertheless, if you got to see the Jan 31 lunar eclipse in the US, I hope you enjoyed your non-super, non-blue, non blood moon!
Posted by Liam at 12:57 PM