A mini-lesson about the safety of Torah

Remember my little article from a few weeks ago about our dog’s “Torah” (the little wire fence that keeps him safe in our backyard because it’s a deterrent to keep him from straying)? Well, a couple mornings ago when we got ready to let him out the back door into his “Torah” we noticed a small herd of deer hanging out just up the hill. Figuring they would be no threat as long as we were there to keep an eye on him, we hesitantly let him out.

To our surprise, one of the does came strutting down the hill to have a closer look at little Dallas, and so Bill stepped outside, just to let her know Dallas’ Dad was going to be watching, just in case she had evil on her mind. This, of course, caused the doe to stop and back up a little, but she didn’t leave.

Seconds later, Dallas was ready to come back inside (he’s almost blind and deaf, so he didn’t even know about the deer), and when he turned to head back inside, the doe started trotting toward him, outside the little fence. It was adorable, and she honestly appeared to just want to play, but Dallas was oblivious. Once Dallas was out of sight, the doe slowly turned and left. She never once tried to step across the fence into Dallas’ “Torah” - obviously, because Bill was standing in it…. 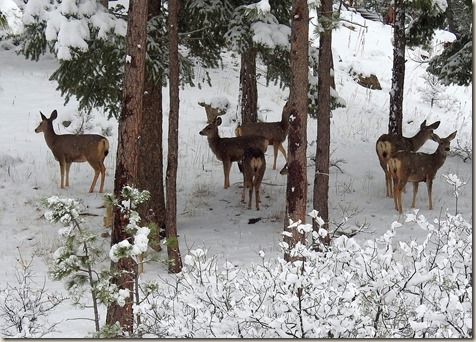