Can you outline the many errors in this meme?

I’ll start off by showing how the person who created this meme didn’t understand the context of Hebrews 8:7.  Let’s take a look at that whole passage from the Hebrew mindset….

Hebrews 8: 7. For, if the first (covenant) had been faultless, there would have been no place for this second (one).[1]  8. For he rebukes them and says: Behold the days come, says Master YHWH, when I will complete with the family of the house of Israel and with the family of the house of Yehuda, a renewed covenant;[2]  9. not like the covenant which I gave to their fathers in the day when I took them by the hand and brought them out of the land of Egypt; (and) because they continued not in my covenant, I also rejected them, says Master YHWH.  (AENT)

[1]   Most Christians seem to forget that without the first covenant, the second one is impossible!  In very short order Rav Shaul will quote Jeremiah 31:31-34, indicating that the Renewed Covenant is a contingency triggered by, and deriving authority from, the first covenant.  YHWH declared that the Ancient Covenant He made with Israel was good; it was to bring life, but the people of Israel chose to willfully break this Covenant and treat it as a vain thing.  See Deuteronomy 32:46, 47.

10. But this is the covenant which I will give to the family of the house of Israel after those days, says Master YHWH: I will put my Torah in their minds and inscribe it on their hearts; and I will be to them a Elohim, and they will be to me a people.  11. And one will not teach his son of the city nor his brother, nor say: You shall know your Master YHWH: because they will all know me, from the youngest of them to the oldest.  12. And I will forgive them their iniquity; and their sins will I remember no more.  13. In that he said a Renewed (Covenant), he made the first old; and that which is old and decaying, is near to disappearing.[3] (AENT)

[3]  The context is Jeremiah 31:31-34, what is “near to disappearing” is the sinful nature of man that breaks Torah, not the standard of Torah. Remember that we broke Torah, not YHWH.  YHWH did not drop the standard of Torah because Israel chose disobedience; rather, He installed a Renewed Covenant to write Torah upon the heart through the work of the Ruach haKodesh, according to Mashiyach.  The fact of the matter is that in Mashiyach,

YHWH raised the bar; He magnified Torah; see Isaiah 42:21.  Because mankind broke Covenant, YHWH requires complete renovation on our part, not YHWH’s part of the Covenant.  This verse in its twisted form, became one of the “crown jewels” of Torahless Christianity which teaches that Torah is decaying and is near to disappearing, but nothing could be farther from the truth.

Here is the key that sets the context for Hebrews 8:13.  Throughout chapter 7, it is the “instruction” (Torah) of the Levitical priests being discussed, pointing towards Awraham submitting his sons to be into the line of Melchisedec (Malki-Tzedek), by tithing to this man in advance.  What happens is a switching of priestly modalities within Torah where the priestly model in Exodus gives way to its predecessor from Genesis, in accordance with all the prophecies in the Tanakh.

Again, Pagan tradition uses this passage to teach that it is the “Law” that is passing away.  Another vital component to understanding this priesthood is that the akeida (binding of Isaac) points to the Malki-Tzedek priesthood, not to the Levitical priesthood.  The akeida is fully realized in Mashiyach ben Yoseph, the Suffering Servant who is Y’shua.

So, as you can see, basically, it's playing with fire when you attempt to present Hebrews 8:7 as "proof" that God's original covenant was "faulty".... NOTHING coming out of the Kingdom is faulty! 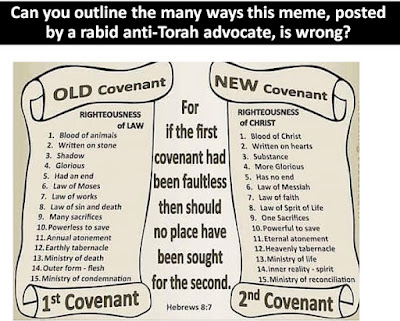