Let's debunk that "law is a curse" nonsense, shall we?

It always amazes me to see people making comments about how the "law is a curse."  My goodness, the "law" (which actually refers to TORAH) CANNOT be a curse!  YHWH's Commands have never been a curse!  It's blasphemy to even suggest that! The bottom line is, those who able to make ignorant comments like that that are completely Bible illiterate....

So, let's see why they are in error:

As you all know, even Peter said that Paul would be hard to understand (2 Peter 3:15-16). However, the answer to this "under a curse" situation is really very simple.

First,  look who Paul is writing to. The congregations in Galatia, Galatians  1:2. Why is he writing to them? Because they have already fallen away  from faith in the Messiah and had been confused and challenged by men  who do not believe in the Messiah (1:6-7). What does Paul say about  these teachers?

He says they "are men who agitated you and desired  to pervert the Good News of Mashiyach" (1:7), and that these men  "preach outside from what was preached to you, let them be cursed. ...  Whichever man preaches to you outside of what you have received, let him  be accursed" (1:8-9).

Now, read Galatians 3 with this in mind, but first, understand that Torah says: "A curse on anyone who does not confirm the words of this Torah by putting them into practice"  (Deuteronomy 27:26).

In  Galatians 3, Paul is teaching (again) that righteousness does not come  through "works", rather, that righteousness is through faith, and faith  is demonstrated by works (Galatians 3:2-6). Then, referring to  Deuteronomy 27:26, Paul says in 3:10 "For those  who are servants of Torah are still under a curse, for it is written,  “Cursed is everyone who does not act on all that is written in this book  of Torah.”

Paul goes on through the rest of Galatians 3 to  explain that he's talking about those very men whom he mentioned back  in Galatians 1:7; that those men are cursed because they teach Torah,  but they do not live by Torah!

Read the way Paul puts it in Romans 2: "13.  For not the hearers of Torah are righteous before Elohim; but the doers  of Torah are being made righteous. 14. For if Gentiles who have not  Torah will, by their nature, do the things of Torah; they, while without  Torah, become a Torah to themselves.

15. Additionally, they show the  work of Torah as it is inscribed on their hearts; and their conscience  bears testimony to them, their own reflections rebuking or vindicating  one another." (Romans 2:13-15)

But about the Torah-teachers he says:

"17.  But if you who are called a Jew, and rely yourself on Torah and glory  in Elohim, 18. (And further that you think) that you know His good  pleasure and discern obligations because you are instructed in Torah;  19. And (that Elohim) has confidence in yourself, that you are a guide  to the blind, and a light to them who are in darkness,

20. And an  instructor of those lacking knowledge, and a preceptor to the young; and  you have the appearance of knowledge and of verity in Torah (then what  do you all say to the following):

So, there you have it. When Paul says in Galatians 3:10 that those who are servants of Torah  are still under a curse  [that is, they demand serving Torah, but they  are not living by Torah], it is because they, themselves, don't live by Torah as true servants for YHWH.

(Refer back to Deuteronomy 27:26, which says:  26 "'A curse on anyone who does not confirm the words of this Torah by  putting them into practice.'All the people are to say, 'Amen!') 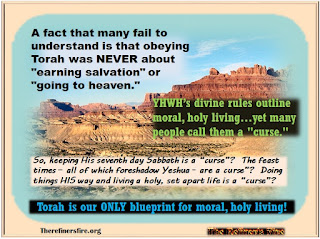