If you love to read, check out this Messianic psycho-thriller!

If you like to read psycho-thrillers, I’ve written a real page-turner!  It’s called, “Destroyed from Within!” and it contains all the right elements to keep you in suspense from start to finish!

"Destroyed from Within!"  contains mystery; intrigue;  rape; murder; dark secrets; a man sent by Satan who manages to destroy a Messianic synagogue by causing people to doubt their belief - while driving to the brink of insanity a woman with a past that consisted of violent sexual abuse.  And oh yes, there is a Nazi connection….

"Destroyed from Within!"  is about a Messianic synagogue that is about to be shattered by Rex Lambert, a handsome middle-aged rancher who likes to play with people’s minds by challenging what they think they know about God and the Bible.  The very cunning and arrogant Rex literally manages to turn the synagogue upside-down...mainly because the weak synagogue leadership doesn’t know how to handle him.  Not only does Rex end up having an affair with the Rabbi's wife (which destroys the Rabbi's whole world), but he also reminds the main character, Rebecca Ritter, of her sexually abusive father  - who, as she ultimately discovered, had a few sinister “skeletons in his closet.”

Encounters with Rex force the forty-something “Becca” to delve into her past and come face-to-face with the horrific incident that caused her to block most of her childhood from her memory.  The story is an intense, fast-moving psycho-thriller that reveals how the “sins of the father” are passed along from generation to generation; while delineating the many ways in which congregation leadership and weak faith can lead people completely away from God.

“I Literally could not put it down, even when I was crying, I finished it last night. And just lay there  thinking all about it. What a gift you have been given it is a real thriller.”

“WOW it is wonderful, I don't think I will never be the same again!”

“I just finished the book and found myself crying and engaged with the characters.  That tells you that you have done a fantastic job bringing a compelling story to life and weaving the faith into it without the feeling of preachiness.”

“WOW!  What an action-packed ride!  Had me breathless in places!”

“An exceptional novel, powerfully narrated with extremely praiseworthy intentions.  And it certainly has the WOW factor!”

“Very full-on,  edge-of-seat dramatic happenings  -  with lots of "Whew!" moments!  It certainly reveals that ineptitudes" (especially those against God)  bear consequences!”
“An extremely exciting and intense novel with some thoroughly worthwhile underlying, thought-provoking messages, which prayerfully, may serve as a catalyst for developing a faith in and obedience to our Great Creator!” 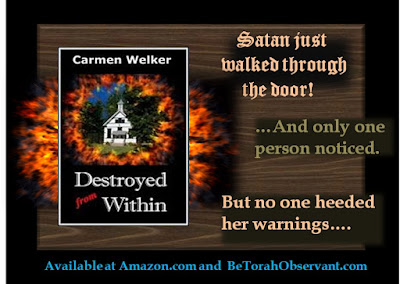