If it takes a wall to stop illegal immigration, let’s DO it!

I'm a first-generation American who came to the United States with my mother who married an American soldier. I became a citizen at the age of 14, joined the US Army at age 18, and graciously served the United States until my "retirement" at age 40. The United States has afforded me numerous opportunities I would never have had in Germany – and for that I will be eternally grateful.

It seems people like me - who know where they came from and appreciate where they are now – are much more aware of the need for “border security” than most natural-born citizens who have no clue and take our country for granted, and ignorantly see nothing wrong with people FORCING their way across our borders, DEMANDING to be taken care of by the US government.

Much of my awareness came from my 22 years in the Army where (through the many classes and schools that were required for advancement to higher ranks), I learned the importance of a smoothly-running government and well-secured borders.

The reasons include not only the prevention of the illegal movement of weapons, drugs, contraband, and people; but also hinder the potential spread of infectious diseases and to deter the influx of another country’s thugs – the “bad guys” (i.e., terrorists who wish to harm America).

And let's not forget that is is is IMPERATIVE to control the influx of people who are perpetually in need of welfare services! It seems that many liberal Americans cannot understand that open borders place a strain on limited public resources such as medical services, schools, and the criminal justice system!!

The bottom line is that we have enough problems of our own, without being forced to take in or take on a yearly influx of millions of “hard-luck” cases from other countries.

Protecting our borders is imperative for the lawful and process of immigration and the promotion lawful trade and travel, and is essential for economic prosperity, and national sovereignty. If it takes a "wall" then let's do it and stop all the bickering! 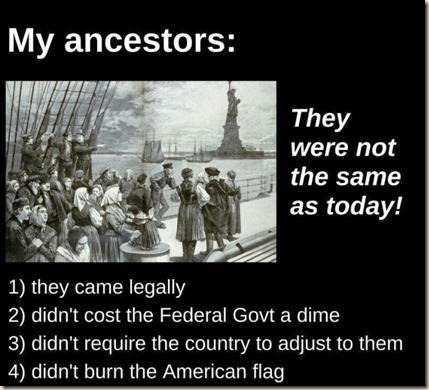