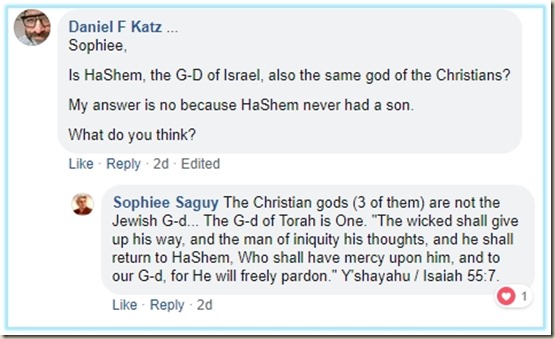 OUR RESPONSE: Actually, Sophiee is incorrect about the Christians having “three gods.” Christians absolutely view ADONAI as the ONLY God. Unfortunately, they have come to view Jesus as God as well – when, in fact, he was YHWH’s Divine MESSHIAH. (Divine, because he came from God; he was the arm of God, Isaiah 53:1; he was the Word, John 1:1, 14).

And yes, some denominations view “the Holy Spirit” as a “person” – which is absolutely WRONG. However, the Ruach IS from God, a part of God; and, consequently, they refer to the Holy Spirit as “God”….

While Sophiee quotes Isaiah 55:7, she misses the importance of Isaiah 43:11 where HaShem says that HE would be the people’s savior. Since “to be saved” requires a blood substitution (Leviticus 17:11), just how does HaSHem “save” if there is no blood redemption?

(And, any counter-missionaries reading this, before you attempt to counter with your idea about how “mere men cannot atone” – read our blog post, which provides biblical PROOF to the contrary!)

While Christianity certainly has many things “wrong”, one also must give them credit for what they have “right” – which is (unlike traditional Jews who refused to recognize the Messiah ADONAI sent, even while he was walking among them; and who were, in fact, responsible for initiating his death), Christians believe in the God of Abraham, Isaac and Jacob AND His Messiah.

And for that, people like Sophiee wish to beat them to a pulp … the very people who support Israel. (Muslims don’t, and neither do atheists or most of the secular world which blames Israel for all the problems in the Middle East!) So, shame on the “Sophiees” of the world for that!

Yes, Christians are guilty of “being off the mark” when it comes to Scripture. They have changed the name of the Messiah, along with the dates of his birth, death and resurrection, and come up with their own "holy days" of Christmas and Easter instead of adhering to the commanded Seventh Day Sabbath and Biblical Feasts...all, while dining on swine and shellfish!

But that is exactly why many Christians are coming out of their respective churches and finding their way to Messianic synagogues – which is yet something ELSE the counter-missionaries poke fun at!

Somehow, counter-missionary Jews - who are busy leading Christians and Hebrew Roots types (who aren’t properly grounded in Scripture) AWAY from “Jesus”, and who sit around to constantly (in many cases viciously and in an ungodly manner) berate, harangue and harass those who DO believe that Jesus is the Messiah – view themselves as sin-free and perfect … when, in fact they are just as far from it as Christians who haven’t yet figured out the whole concept of YHWH/Yeshua/Torah.

But yes - Christians DO believe “in the same God” – and at least those who are truly “born again” (unlike most secular and even many “holy” Jews who sit around to fight and argue and use language unbecoming of a believer – exhibit “godly” behavior and reflect their belief to the best of their ability (however much off the mark it might be, because most of them do not yet know Torah).