Responding to the drivel of a typical “counter-missionary” 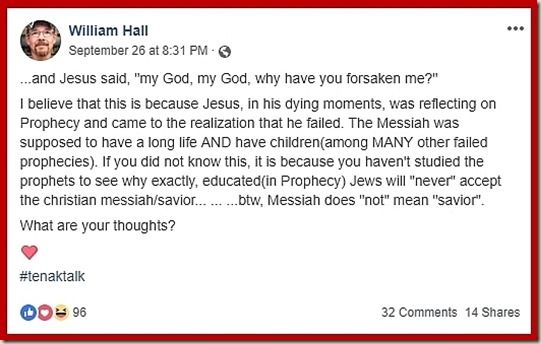 This pawn of the Jewish rabbis truly seems to think highly of himself. Take a look at the screen shot above and ponder the hateful things he wrote - things that reveal how very little he actually knows when it comes to the New Testament!

Since he asked "What are your thoughts?" I'll just take a moment to provide mine:

Actually, Mr. Hall, Yeshua never said, "Why have you forsaken me?" He said, "Why have you spared me?" These words are straight from the Aramaic English New Testament (AENT) which is a translation of a copy of the oldest NT ever discovered, the Khabouris Codex which was written in all Aramaic - no Greek in sight! Here's the scripture along with its footnote from the AENT:

Matthew 27: 46. And about the ninth hour, Y’shua cried out with a loud voice and said, My El! My El! [Lemana shabakthani] Why have you spared me?

"Y’shua was not necessarily quoting Psalm 22, although the imagery of the Psalm is certainly intended by Matthew. Greek is transliterated Eli, Eli lama sabacthani, but Peshitta and Psalm 22 read: Eli, Eli lama azbatani.

"Many Bibles read "forsaken" from which came a false teaching that the Father left Y’shua destitute (Marcionite thinking). Isaiah 53:4 indicates that "we" reckoned him smitten of Elohim, but it is not YHWH who tortured His own son, but men motivated by religious tradition. Psalm 22 references those who scorned Y’shua for his Faith in YHWH and called him a worm (detested), but Father YHWH does not forsake the righteous, nor does He at any time "forsake" His own Son – see Psalm 9:9, 10; 37:25; 71:11; Isaiah 49:14-16.

"Y'shua says "Eli" (my El). He is in great physical pain after being brutally tortured; those around him were confused about whether he was saying "Eli-yah" or "Eliyahu". If Hebrew eyewitnesses were not sure of what he was saying, it shouldn’t be a surprise that Greek transliteration was also wrong, putting "lama sabacthani" rather than "lemana shabakthani".

"Perhaps the reason Y’shua says "why are you sparing me" is because he has proven his commitment by laying down his life and has already endured about six hours of the execution! So, it’s not a matter of being "forsaken" but that he literally means, "Father, I'm ready, why can’t we finish this?" In a matter of moments from saying this, he dies, which fully supports this interpretation".

Moving on to Hall's next comment that Messiah Yeshua "came to the realization that he failed." Is that so, William? Try pushing aside your own hateful agenda while checking out the many prophecies he fulfilled - and try to view them from GOD's perspective for a change: https://therefinersfire.org/accurate_messiah_prophecies.htm

Next comment: "The Messiah was supposed to have a long life AND have children...." Here's a SCRIPTURAL response for ya! https://blog.therefinersfire.org/2018/10/challenging-one-of-jewish-counter.html

And as for William Hall's final comment, "btw, Messiah does not mean "savior" - well, that's what he gets for viewing YHWH's Messiah - the ANOINTED one - through "Greek" eyes. Too bad for him, because by rejecting YESHUA, he has lost his salvation!

9. Y’shua said to him, I am with you all this time and you do not know me Peleepa? Whoever sees me sees the Father, and how do you say, “Show us the Father?” 10. Don’t you believe that I am in my Father and my Father is in me? These words that I speak, I do not speak of myself but He who dwells in me, my Father does these works.

11. Believe that I am in my Father and my Father is in me; otherwise believe even because of the works. 12. Amen, amen I say to you that whoever believes in me, these works that I do, he will do also, and more than these he will do because I go to the Father. (AENT)

FOOTNOTE: Y’shua is the Way; the Hebrew Derek (way) is first mentioned in Genesis 3:24, as the “way to the Tree of Life.” Throughout Torah and the Prophets “Ha Derek YHWH,” the Way of YHWH, is presented as keeping the Commandments of YHWH, living a righteous Set Apart life, walking in humility and service to YHWH and His Creation.

Y’shua exemplifies “Ha Derek YHWH” by demonstrating solidarity and obedience to Torah, through his extravagant love and obedience to his Father, and by serving YHWH’s people according to the ministry of the Ruach haKodesh.

Y’shua is the Truth; the Hebrew Emet (Truth) is first mentioned in Scripture when Abraham’s servant Eliezer worships YHWH because of His Mercy and Truth. Through walking in “the way” (of YHWH) he was divinely led to his master’s brethren where he found Rebecca, Genesis 24:27. Truth leads us to the Master of the Universe and to live among and be part of His called out people.

Truth reveals the cause and effect of our choices each day; as we walk in Truth we see the beauty and importance of the Way of Life. Y’shua said, “He who desires to do His will (walk in Truth) can comprehend my teaching, if it is from Elohim,” Yochanan 7:17. Y’shua is the Life. The Hebrew Chai (life) is first mentioned in Genesis 1:20, when Elohim first created living creatures.