Shabbat shalom, mishpocah/family/friends!  As always, a synopsis of this week’s Torah study can be found on our website.

In the previous Torah portion we saw Ya'akov (Jacob) fleeing from his father-in-law Lavan as he heads back to his homeland and his own father. Unfortunately, he still needed to face his twin brother, Esav (Esau), who squandered his his birthright in exchange for a bowl of lentil soup (Genesis 25), and later, getting his father Yitz'chak (Isaac, the second Patriarch) into giving him (Ya'akov) the blessing of the firstborn (Genesis 27). Please read Genesis 32:4 - 22 to get a feel for Ya'akov's anxiety and frustration about meeting Esav for the first time in more than 20 years.

This week's parashah is exciting on several levels because we get to see YHWH's "grand plan" in birthing Israel as a people and a nation! Here's how it unfolded:

Genesis 32: 22 He got up that night, took his two wives, his two slave-girls, and his eleven children, and forded the Yabok. 23 He took them and sent them across the stream, then sent his possessions across; 24 and Ya'akov was left alone. Then some man wrestled with him until daybreak. 25 When he saw that he did not defeat Ya'akov, he struck Ya'akov's hip socket, so that his hip was dislocated while wrestling with him.

26 The man said, "Let me go, because it's daybreak." But Ya'akov replied, "I won't let you go unless you bless me." 27 The man asked, "What is your name?" and he answered, "Ya'akov." 28 Then the man said, "From now on, you will no longer be called Ya'akov, but Isra'el; because you have shown your strength to both God and men and have prevailed." (CJB)

Please note verse 24 where "some man wrestled with him until daybreak." As we continue reading, you should have noticed that this couldn't be just any man; it was Yeshua, the arm of YHWH (Isaiah 53:1) sent in the form of a man to wrestle with Ya'akov! How do we know this? Please refer back to Genesis 32:3-5 and also Genesis 35:1 where YHWH says: "Get up, go up to Beit-El and live there, and make there an altar to God, who appeared to you when you fled 'Esav your brother. (Genesis 32:3-5)"; plus nobody but YHWH has the power to rename someone - especially the man who would end up giving birth to what became known as the Twelve Tribes of Israel! 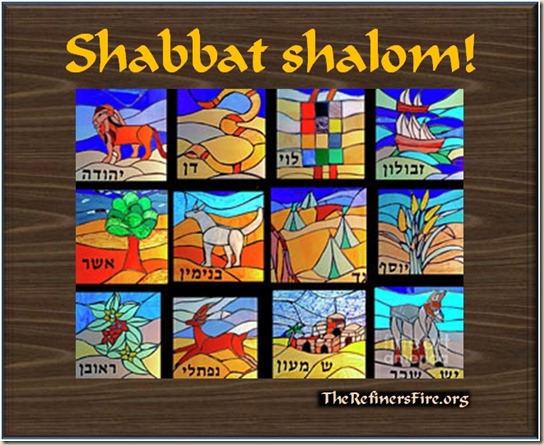