Challenging the comments of some Yeshua-rejecters 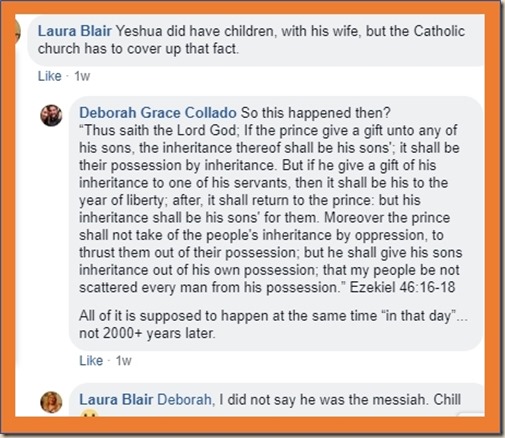 One has to wonder what Bible these Yeshua-rejecting women are reading, because it certainly isn't the one God "breathed!"

First, who are these women to suggest that YHWH has to do things according THEIR timeline?  How arrogant can you get?

Secondly, if Y'shua had had a wife and kids, He would never have chosen to die on that stake, to leave behind a widow and orphans! YHWH would not have expected Him to do that. Y'shua's mind - as we see in Luke 2:49 - was always on YHWH. He knew who He was, and He didn't have time for a wife and family.

That would have been a huge distraction. So, this attempt by the anti-missionaries is like ALL their attempts to discredit Y'shua - it's weak, and it's a slap in the face of YHWH whom they are calling a liar. (See Isaiah 53 and all of the Feasts/Appointed Times which foreshadow Y'shua.)

God is preparing a BRIDE for Messiah from His body. Please feel free to search on the word "bride" in the Bible, and you'll see what that means.... It would seem that "in the end" the beginning will be fulfilled.

Plus, on some level, YHWH fulfilled the "be fruitful" by begetting a Son who has opened the Kingdom to everyone who believes in the reality of this Son. There's a LOT of fruitful and multiplying going on through Messiah, but just not "in the flesh" - and remember, when Adam and Eve were told this, they were still "unfallen."