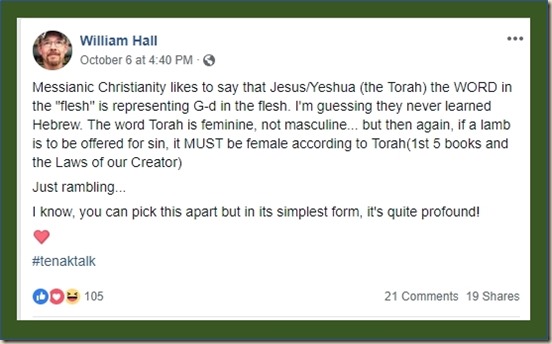 Oh, this is just too easy! "The word Torah is feminine, not masculine?" SO WHAT?

According to a footnote on John 1:1 in the Aramaic English New Testament....

"The phrase B'resheet aytohi hwa miltha, breaks a most basic rule of Aramaic grammar by combining a feminine noun (miltha) with two masculine verbs for "to be" (aytohi, hwa).

“This is unheard of in Aramaic literature other than right here in this passage and in 1 John. This shows YHWH (Yahweh) has male and female "images/spirits" even though YHWH remains a He. It may also be a midrash on Isaiah 11:1-2, which describes the Spirit of YHWH descending on Mashiyach using both masculine and feminine suffixes. This is not something easily translated, let alone when it occurs within the first four words.”

If William Hall would read the Bible in context, he would discover that, while Yahweh might have male and female "images/spirits" He is always referred to in the masculine gender - as is His Son!

In Hebrew, the Shekinah, the manifestation of God's presence that fills the universe (Holy Spirit), is conceived of in feminine terms, and the word Shekinah is a feminine word. But that does not make our Creator or His Son female! The foreshadowed Messiah of Israel both in the Bible and in the Talmud (Jewish "oral Torah") is referred to in the masculine gender. Even all the angels referred to in the Bible are male!

And, oh by the way, a sin offering didn't necessarily have to be FEMALE - that is a LIE! Click here to see what SCRIPTURE says!