Some have noticed, as they've looked ahead for the Passover and the Holy Feasts in 2019, that the 2019 calendar on The Refiner's Fire has Passover on March 21-22 while the traditional  Hebrew calendar found everywhere else has Passover on April 19-20! And few may have noticed that this happened just recently, in 2016 as well. What gives?

The simple answer is that the same thing that happened in 2016 is happening again. The traditional Hebrew calendar of today (which is the modern adaptation of the calendar established by Hillel II), rigidly applies the 19-year "Metonic Cycle" into the scheduling of which calendar years must include a "leap month" - and in 2019, the "leap month" we see in March in the traditional calendar is simply not needed.  If "calendar stuff" is not your bag and you don't want to continue reading to find out why the traditional calendar is wrong in 2019, suffice it good enough to know that the current Hebrew year, 5779, (2018-2019), is not the correct year for the intercalated month.  Passover falls in the proper time without the added month.  I already stated that the same problem happened in 2016 (see 2016 Calendar Craziness!, and it will happen again in 2024 as the traditional Jewish calendar falls more and more out-of-step with the actual sun and moon.) If you'd like to know more, please read on, but note that much of the explanation here is the same as from our 2016 article…

The way the Hebrew calendar works is that Passover must fall on  or near the day of the Vernal Equinox,  but not before the Vernal Equinox. This is primarily from Exodus 12:2 “You are to begin your calendar with this month; it will be the first month of the year for you…” and Deuteronomy 16:1 “Observe the month of Aviv, and keep Pesach to Adonai your God; for in the month of Aviv, Adonai your God brought you out of Egypt at night.” Combined, these verses require that Passover be kept on or after the Vernal Equinox, so it is forever to be kept at the time the Hebrews were brought out of Egypt which was the “month of the abib”.  Most don’t realize it, but in these verses, YHWH anchored the day of Passover to the sun, not to the month of Abib (Nisan) to the sun, and that the calendar actually did not change, but only the counting of the months.

So what happens in the Hebrew calendar (not unlike the civil Gregorian calendar), in order to keep Passover on or after the Vernal Equinox, periodically an extra month must be inserted.  In the Hebrew calendar, this extra month is inserted before the month of Adar so what would have been the month following Shevat becomes “Adar I” and what would have been Adar becomes “Adar II” for “Adar” must be the last month before Nisan. And that begs the question “How does today’s traditional calendar work?”

There are 12 lunar months in 1 solar year.  But the year (not the calendar month) is determined by the sun and stars. (If there were no moon at all, we would still have and know the "year").  And it is the sun which causes and determines the "seasons" (winter, summer, planting and harvest) not the "moedim").  It is the moon which determines the "calendar month" and the "season", i.e., the "appointed times", the moedim, that fall in any given month.  (Since the agricultural seasons are absolutely tied to the sun, and the "moedim" are tied to both the month, and the agricultural season of the year, the word "moed" has become largely confused and sometimes people think the "month" is tied to the agricultural "signs", i.e.,  the barley crop.  But go back and look at Genesis 1:11-18 and see that even though YHWH made the grasses and seed bearing plants first, before the sun, moon, and stars were "placed" (verse 17), it's only when the sun, moon, and stars were "placed" that "day and night" and the agricultural seasons began.  Had YHWH not placed the sun, moon, and stars as He did, the plants he created would have required some other annual schedule mechanism to grow and seed, for without the seasons created by the sun, plants would not have the life-cycles we have always known.  And note that verse 14 does not say: "Let there be lights in the firmament of the heaven to divide the day from the night; and let them be for signs, and for seasons, and for days and the ripening of the crops for the years".   Ripening crops is an earth sign, and no verse says any earth sign trumps a heaven sign.)

Man has known for thousands of years the "signs" in the sun and stars that identify one complete year.  There are four very clear "divisions" of the year, roughly 90 days or 3 months apart.  These divisions are the northernmost point of the sun which marks summer, the southernmost point of the sun which marks winter, the point when the sun is exactly due east as it is moving from south to north which marks spring, and the point when the sun is exactly due east as it is moving from north to south which marks the fall or autumn.   We know from Exodus that "Abib" was the "month of newly-ripened grain", (or the "month of spring") and that crops begin to ripen in the season of spring, and we know that the exodus began in spring, and that the night of the exodus (14-15 Abib), it was already spring AND that Abib had been determined by the calendar that existed before the moed of Pesach was created.  Therefore, the sun had already been at the point when "spring" begins and Abib was already established when the exodus began. (It's very important to understand that the crops ripen because of the month it is, not that crops determine what month it is.)  So the commandment to keep the feast "at the time appointed in the month Abib [Nisan]" (Exodus 23:15), means that the calendar must keep Abib as close as possible to spring (today we call it the "Vernal Equinox"), and then the moed of Pesach can happen.  Thus, the month of Abib is the month when Passover falls on or after the Vernal Equinox.  (In 2019, without adding the leap month, Passover falls just after the Vernal Equinox which is March 20th.  Therefore the "real" moon in early 2019 indicates no leap month is required.)

If Passover (the afternoon of the 14th of Abib [Nisan] were to fall BEFORE the Vernal Equinox, then a “month” must be inserted! It’s that simple and that is the purpose of the leap month – to keep Passover from happening before the Vernal Equinox.  Many will argue that there is nothing in scripture requiring Passover to fall on or after the Vernal Equinox.  While that is a true statement, there are also no scriptures requiring waiting for the barely crop to ripen to establish the month of Abib, nor are there any scriptures calling for the month to begin with the sighting of the crescent moon.  But the sages do interpret Deuteronomy 16:1 "Observe the month of Abib and offer a passover sacrifice to the LORD your God, for it was in the month of Abib, at night, that the LORD your God freed you from Egypt" (JPS) to mean spring must come first, then Passover.  That means that the "month of spring" is the month in which Passover is established immediately after spring has begun.  Again, the start of spring is determined by the sun, so the "month of spring" must be the new moon that places Passover in the “month of spring” which keeps the calendar in compliance with Exodus 12 and 23:15. No “rigid schedule”, no “barley”. 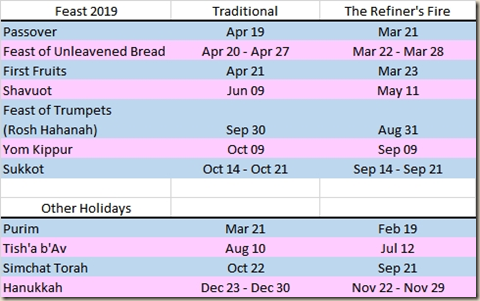 The rigid application of the Metonic cycle without regard to the "real" moon is the major problem with the 2019 traditional Hebrew calendar which applies an unnecessary leap month manifested in February, 2019.  That unnecessary month causes all the Holy Days for 2019 in the traditional calendar to be one month late.  The many other problems with the modern traditional calendar include the use of the "molad" of the moon, which is an "average" lunar month which sometimes causes the 1st of the month to be a day early or a day late, and the rules for "postponement" where the 1st of Tishri is held 1, 2, or 3 days so Yom Kippur will not fall on a Friday or a Sunday.  We believe the use of the "average moon" to calculate the 1st day of the month is wrong.  We also believe the "postponement" rules are wrong, as they are simply not scriptural.

We realize this issue will cause no end of concern, confusion, and argument and some will simply say "follow the accepted calendar for the sake of commonality".  We can't do that.  In the end though, we don't argue "which calendar" is better or "which calendar" should be used.  We believe it is far better to observe the Holy Days rather than not observe them, so we at The Refiner's Fire recommend you learn the meaning of the Holy Days, and observe them by whichever calendar you chose.  If you have a congregation celebrating by the traditional calculated calendar, then by all means, celebrate with them.  That beats the "rest of the world" which does not observe any of the commanded Holy Days in favor of "man-made" holidays which masquerade to be about God.