How exciting that we’re once again approaching Yom Teruah/Rosh HaShana (which, this year, starts sunset on Sept. 10th)! This particular mo’ed (festival/appointed time) serves several purposes: It is the Jewish Civil New Year; the creation of the world, according to tradition; the anniversary of the creation of Adam and Eve and their first actions toward the realization of man's role in the world; of the first sin that was committed and resulting repentance; a day when YHWH takes stock of all of His Creation, which includes all of humanity.

It's also a rehearsal for the day when the bridegroom will come to claim us, his bride, who are betrothed to Him. (For those new to Torah and YHWH’s Appointed Times, we offer this short article that briefly outlines each of the Feasts.)

By the way, for those who have been wondering “why there are two Jewish New Years” - weell, the answer is actually very simple, as explained in an article on our website. 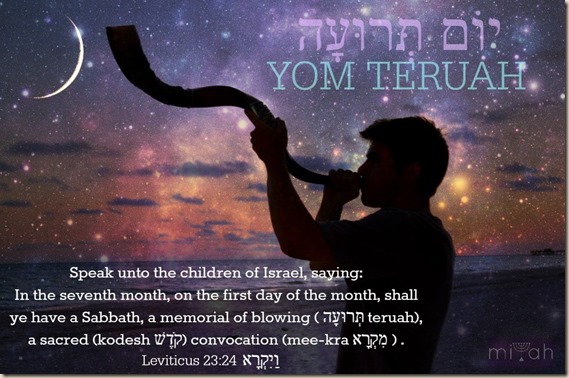