Beware of the wiles of counter-missionaries!

BEWARE of counter-missionaries - those who attempt to tell you Y'shua is a fraud and the New Testament is a myth! Take a look at this deceitful meme below....

The answer to the question posed in this meme is this:

Individual sins can be forgiven by repentance and prayer. But saying "Torah does not require a blood sacrifice for forgiveness of sins" is, by itself, not an accurate statement!

The blood sacrifice made by the Levite Priest at the Temple, was the guarantee of everlasting life! Leviticus 17:11 makes this abundantly clear! "For the life of the flesh is in the blood, and I have assigned it to you for making expiation for your lives upon the altar; it is the blood, as life, that effects expiation." (JPS Tanakh). Let's examine this verse a moment because its significance is lost in the English:

While the word "life" is used in the verse a total of three times, the actual Hebrew word in the verse is "nephesh" - more properly translated as "soul" rather than "life". The English word "life" does not convey an accurate meaning of nephesh. Actually, the English word "soul" does not convey a proper understanding either, but a more accurate English translation might be: "For the soul of the flesh is in the blood, and I have assigned it to you for making expiation for your souls upon the altar; it is the blood, that effects expiation of the soul."

That is pretty clear! One "nephesh" is given for another "nephesh". The reason blood sacrifices were specifically called for, was not just that "they forgave sins"; rather, it assured your place in the Kingdom! This was the special significance of the blood sacrifice, because it is about the soul not the sin! The blood from the animal, carrying the nephesh, ceremonially splashed on the altar, substituted for your nephesh/soul and made you "whole" again, so you could be considered worthy of being with YHWH after you physically die.

Otherwise, you are nothing but a filthy body, not worthy of being in the presence of YHWH. In a minute you will see that this verse in Leviticus 17 is very important because it demonstrates that the substitution saves the soul, the nephesh, and prevents it from dying!

For more, see our website's article. 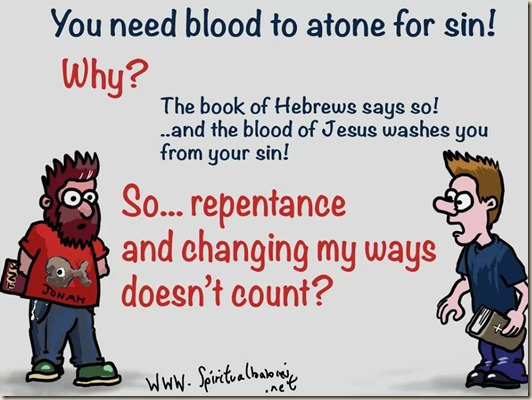