Something interesting about the Hebrew letter “Shin”

Shabbat shalom, everyone! Here is something interesting about the Hebrew letter Shin - ש - which is really DEEP! You'll probably remember that Star Trek actor Leonard Nimoy used a single-handed version of this gesture to create the Vulcan hand salute for his character! (Yes, there was real significance to that gesture!)

As additional explanation for the photo below, which shows an electrocardiogram of a human heart, Shin also stands for the word Shaddai, one of the titles for YHWH. Cohens (priests) form the letter Shin with their hands when they recite the Priestly Blessing.

This letter is often inscribed on the case containing a mezuza (a scroll of parchment with Biblical text written on it, which is affixed upon the door frames of a Believer's home or establishment.). The text contained in the mezuzah is the Shema Yisrael prayer, which calls YHWH's people to love their God with all their heart, soul and strength. The Shema Yisrael prayer also commands the Israelites to write God's commandments on their hearts (Deuteronomy 6:6); 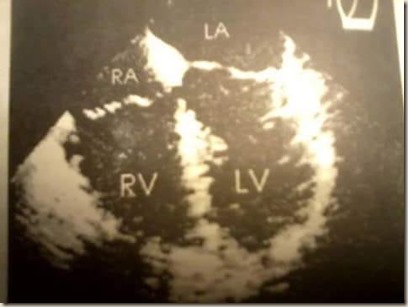 The above is an echocardiogram of the human heart. The Hebrew letter "shin" appears in the tissues that surround the chamber.

The Almighty has said that He would write His name on our hearts. On a mezuzah, the shin stands for "Shaddai" (meaning "Almighty").

Ezekiel 11:19 And I will give them one heart, and I will put a new spirit within you. And I will take the stony heart out of their flesh, 20 that they may walk in My statutes, and keep My ordinances, and do them. And they will be My people, and I shall be their Elohim.