Yom Teruah (Trumpets)/Rosh Hashana begins this year at sunset, September 10. This Appointed Time denotes the Jewish Civil New Year; the creation of the world, according to tradition; the anniversary of the creation of Adam and Eve and their first actions toward the realization of man's role in the world; of the first sin that was committed and resulting repentance; a day when YHWH takes stock of all of His Creation, which includes all of humanity. It's also a rehearsal for the day when the bridegroom will come to claim us, his bride, who are betrothed to Him.

This Feast on Tishri 1 always falls in the September/October timeframe. Leviticus 23:23-25 says: ADONAI said to Moshe, "Tell the people of Isra'el, 'In the seventh month, the first of the month is to be for you a day of complete rest for remembering, a holy convocation announced with blasts on the shofar. Do not do any kind of ordinary work, and bring an offering made by fire to ADONAI.'"

According to tradition, during this time YHWH's people are to concentrate all their efforts into making amends with their brethren and apologizing for past offenses. Judging by the fact that Y'shua has so far fulfilled the first four feasts in sequence, Yom Teruah/Trumpets will be the next one to be fulfilled, because when the trumpets sound, those who have accepted YHWH as their God and His Divine Messiah, will be gathered/resurrected (I Thess. 4:13-18, I Cor. 15:50-54). 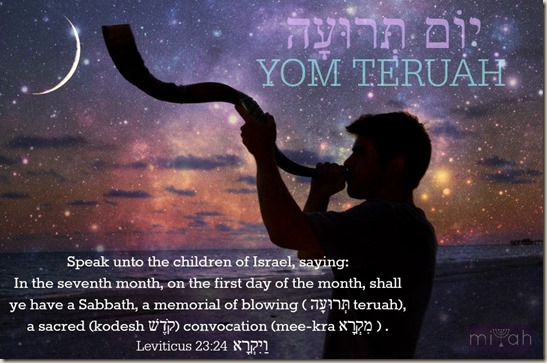