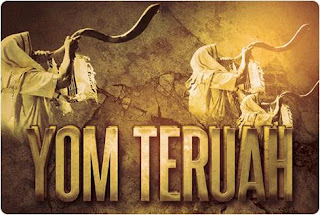 Leviticus 23:23-25 says: ADONAI said to Moshe, "Tell the people of Isra'el, 'In the seventh month, the first of the month is to be for you a day of complete rest for remembering, a holy convocation announced with blasts on the shofar. Do not do any kind of ordinary work, and bring an offering made by fire to ADONAI.'"

This Feast on Tishri 1 falls in the September/October time-frame. The blowing of shofars (rams' horns) signifies the bringing together of God's people, warning them to repent during the coming "days of awe" (the 10 days between Trumpets and the Day of Atonement). It is believed when Yeshua said we "will not know the hour or the day" it is because Yom Teruah is based on the New Moon's appearance. To protect against missing or celebrating the holiday too soon, some observed this holiday for two days.

"Rosh Hashana" is the Jewish Civil New Year; the creation of the world, according to tradition; the anniversary of the creation of Adam and Eve and their first actions toward the realization of man's role in the world; of the first sin that was committed and resulting repentance; a day when YHWH takes stock of all of His Creation, which includes all of humanity. It's a rehearsal for the day when the bridegroom will come to claim us, his bride, who are betrothed to Him.

Rosh Hashanah is celebrated not with fireworks and champagne but with family meals and introspection. The devout believe one’s destiny is set for the coming year during the holiday, and that in the 10 days of soul-searching that follow — leading up to the fast day of Yom Kippur — prayer, charity and repentance can ensure a good year.

According to tradition, during this time YHWH's people are to concentrate all their efforts into making amends with their brethren and apologizing for past offenses. However, what most traditional Jews do not yet realize is that this Feast is the next one to be fulfilled by Yeshua, because when the trumpets will sound and the true believers in Messiah Yeshua will be gathered/resurrected (I Thess. 4:13-18, I Cor. 15:50-54).

This Feast also signals the call for repentance, for the time is short and Judgment is coming upon the Earth - whether people are read, or not! (See the Book of Revelation.)
Posted by Carmen at 12:04 PM