A note about “fractured America” 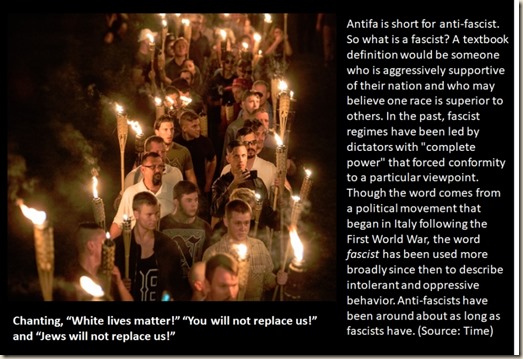 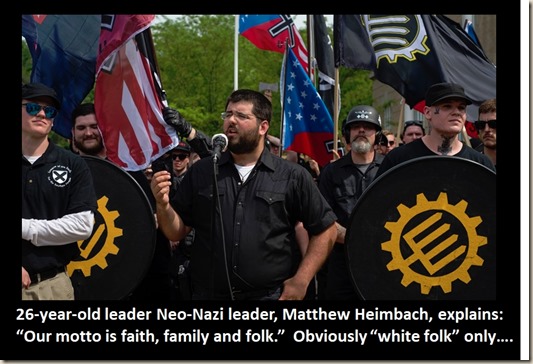 My husband and I recently watched a 20/20 episode entitled: "Fractured America: Extremism in the Streets" (08/18/17). It was a MAJOR eye-opener that revealed, beyond a shadow of a doubt, that we are steeped in the “end times” outlined in the Books of Daniel and Revelation! These hate groups are serious in their respective sick missions to destroy anyone who isn’t the same color or of the same mindset as they are…. (Many photos can be found here.)

In the olden days, we had hate-groups such as the Ku Klux Klan who wanted to eradicate “Negroes.” Those kooks are still around and starting to once again rise up; but now they’ve got competition from new hate groups such as Alt-Right; the fascist Antifa, a left-wing movement based on Marxist, anarchist, and anti-capitalist ideals; and the Neo-Nazis – no explanation needed … all with their own agendas.

Not surprisingly, all of these “intellects” are fighting each other.

So, to put it in perspective, today we have Whites fighting Whites, Blacks fighting Blacks, Blacks fighting Whites and vice-versa , both groups fighting Latinos; and, of course, we also have ISIS, who fights everybody, inciting gullible folks in America and around the world to “kill where they live” - which is code for “go and run your car into innocent crowds of people you don’t know and who have never done a thing to you.”

These groups are mainly all about “race, color and politics,” but there are other factions that exist to argue about everything from vegan vs. meat eating, big pharma vs. natural health remedies, Christianity vs. Judaism (and everything in between); etc. The list is endless. Everybody seems to be fighting everybody. (That much is even evident here on Facebook where you can't post anything without somebody getting upset!)

There are myriad “my way is better than your way” groups - some of which are benign, whereas some can definitely be classified as hate-groups. It truly makes one wonder, "where does it all end?" The answer, of course, is: ONLY when Yeshua returns! Scripture tells us these things would happen:

2 Timothy 3: 1. But know this: That in the latter days hard times will come: 2. and men will be lovers of themselves and lovers of money, boasters, proud, revilers, unyielding towards their own people, deniers of grace, wicked, 3. unloving, addicted to irreconcilable malicious gossips, ferocious, haters of the good, 4. treacherous, rash, inflated, attached to pleasure more than to the love of Elohim, 5. having a form of respect for Elohim but wide from the power of Elohim. Them who are such, repel from you. 6. For of them are they who creep into this and that house and captivate the women who are plunged in sins and led away by divers lusts, 7. who are always learning, and can never come to the knowledge of the truth. (AENT)

James 4: 1. From where is it, that there are among you arguments and conflicts? Is it not from the lusts which war in your members? 2. You covet but do not possess; and you kill and envy, and effect nothing: and you fight and make attacks; and you do not have, because you do not ask. 3. You ask, and do not receive because you ask wickedly, that you may feed your lusts. 4. You adulterers, don’t you know that the love of the world is hatred towards Elohim? He therefore who chooses to be a lover of this world is the enemy of Elohim. (CJB)

Proverbs 24: 1 Don't be envious of evil people, and don't desire to be with them. 2 For their minds are occupied with violence, and their lips speak of making trouble. (CJB)

Proverbs 24: 21 My son, don't get involved with revolutionaries, but fear ADONAI and the king. (CJB)

Proverbs 24: 21 My son, don't get involved with revolutionaries, but fear ADONAI and the king. (CJB)

22 For disaster from them will suddenly appear, and who knows what ruin they both can cause? (CJB)

Romans 12: 19. And be you not avengers of yourselves, my beloved: but give place to wrath. For it is written: If you do not execute judgment for yourself, I will execute judgment for you, says Elohim. 20. And if your adversary be hungry, feed him: and if he be thirsty, give him drink. For if you do these things, you will heap coals of fire on his head. 21. Do not be overcome by evil; but overcome evil with good. (AENT)

See also Deuteronomy 32:35; Psalm 94:1; Prov. 20:22; and remember that there are no directives from B’resheet/Genesis to Revelation which counsels anyone to take vengeance upon their adversaries. YHWH says, “vengeance belongs to Me”; He will judge and resolve all matters according to His Righteous Judgment. The idea of taking vengeance upon others, as in jihad or holy war against the infidels, is rooted in fear and heathenism by those who put their faith in self rather than in Elohim.

The world is not listening; it's getting worse by the day - and all YHWH’s people can do is to pray AND find the intestinal fortitude to speak the Word without hesitation, warning anyone who cares to listen that these things are happening because we are IN the end times – and behavior such as the above is proof! Things are only going to get worse before they get better. Scripture says so…. 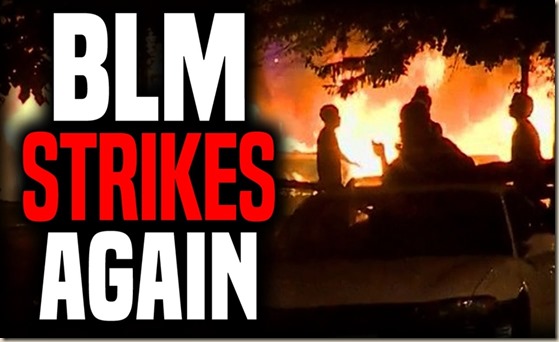 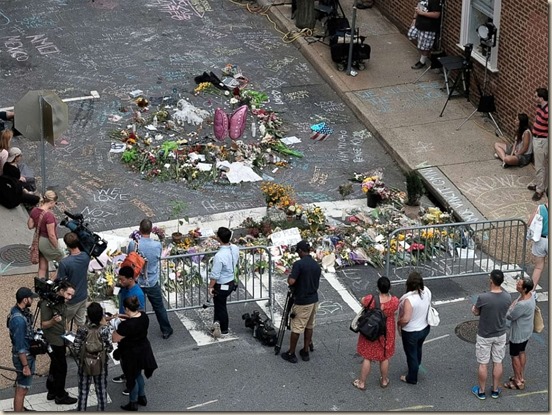 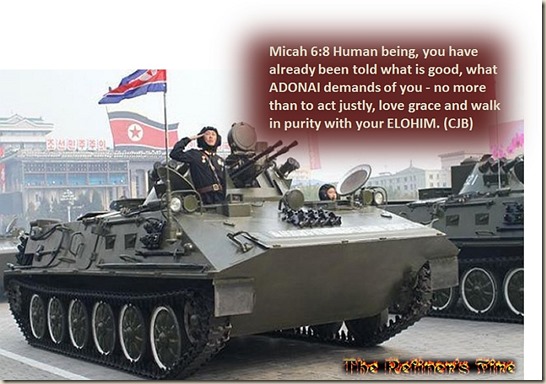