Whom are you worshiping? 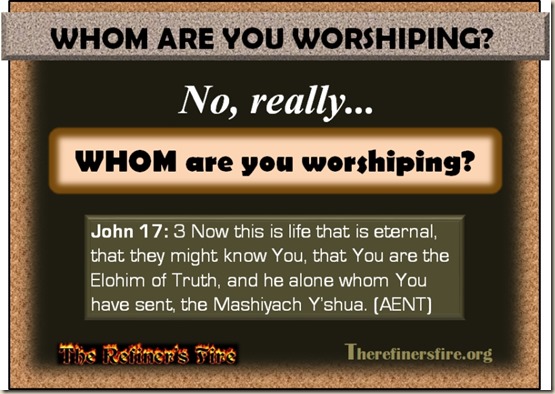 John 17:1. Y’shua spoke these things and he lifted up his eyes to Heaven and said My Father the hour has come. Glorify your Son so that your Son might glorify you. 2. Just as you have given him authority over all flesh that whomever You have given him, he will give to him life that is eternal. 3. Now this is life that is eternal, that they might know You, that You are the Elohim of Truth, and he alone whom You have sent, the Mashiyach Y’shua.

4. I have glorified You on earth. The work that You have given to me to do I have finished it. 5. And now glorify me my Father with You in that glory that I had with You from before the world was. 6. I have made Your Name known to the sons of those men whom You had given to me from the world. They were Yours and You have given them to me, and they have kept Your Word.