Hate groups are evil, ungodly swines with nothing to offer the world 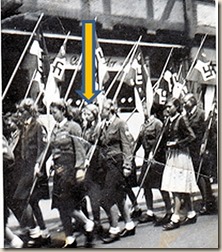 "Neo-Nazis" and all the other maniacal hate groups have NO clue they are catering to satan, who walks this earth, seeking to devour and destroy! (Job 1:7, 1 Peter 5:8) My Jewish mother (who had to hide her Jewishness in WWII Germany) was a product of the Hitler regime - an insidious evil that played a large part in her ending up a mental wreck and an alcoholic. The photo above shows my mother marching in a “Hitler Youth” parade. Hitler Youth was an organization that all German children were required to be members of….

Knowing YHWH is in control, one would think the world would have learned its lesson, but mankind seems hell-bent on destruction, as evidenced by the fact that we once again are forced to witness the rise of “hate groups” – with the media eagerly promoting their sick agenda by granting them an endless air time. Hardly anyone would know about the likes of "grand wizard" David Duke or "neo-nazi" and other “white nationalists” nut jobs IF the media would simply IGNORE those brainless "white trash" dregs of society who have nothing, whatsoever to offer the world except demonic swinery….

America – and pretty much the rest of the world – seems to be out of control; ready to fall into a bottomless pit. Not only is the earth experiencing some natural disasters of “biblical proportions” now; but humanity is doing exactly what Scripture foretold – with most turning away from God and falling prey to their carnal natures. The Bible tells us that most will take that “wide gate that leads to destruction” (Matthew 7:13-14); and that only a “remnant” will stand strong and endure to the end for YHWH’s sake (Matthew 24:13).

2 Thessalonians 2: - 9. For the coming of that (Evil One) is the working of haSatan with all power and signs and lying wonders 10. and with all the deceptiveness of iniquity in them that perish; because they did not receive the love of the truth by which they might have life. 11. Therefore Elohim will send upon them the strength of a deception that they may believe a lie; 12. and that they all may be condemned who believe not the truth but have pleasure in iniquity. (AENT)

I pray that ALL who read this blog will research what is required of them to be able to pass through that “narrow gate” that leads to life….