THIS IS NOT OKAY! Time to stand up to the thugs! 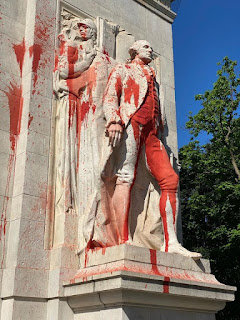 THIS IS NOT OKAY!
America is out of control, and it's time for take control, by whatever means possible, including Martial Law - since nothing else seems to be working! . Arrests need to be made, and those caught destroying property need to be fined, forced to pay for the damages, AND do community service!
Like I keep saying, I foresee Martial Law in our future BECAUSE of people like this. They are backing America into a corner - and it's time to bare our claws and come out swinging!
For those who don't know what Martial law is, it is a law administered by the military rather than a civilian government. Martial law may be declared in an emergency or response to a crisis, or to control occupied territory.
Well, we've got a crisis on our hands, and it's past time to TAKE ACTION! We CANNOT allow thugs to take over America. Yes, we ARE in the end times as outlined in Scripture - but that doesn't mean we should simply allow the lunatics to run amok without consequences. YHWH constantly commanded HIS people to "rid such evil from among you." (Deuteronomy 17:7; 21:21; etc.)
Most of us cannot physically do anything to "rid ourselves of such evil"; however, we CAN use our voices! Speak out against this vile, demonic behavior on social media! Contact our so-called "leaders" (who don't seem to be doing much of anything) to let them KNOW that we decent, law-abiding, hard-working citizens of the United States are sick and tired of seeing America destroyed by lawless loudmouths whose only agenda is to wreak havoc and destroy everything in their path ...our entire society and everything you and I have worked for all our lives - just to make their ridiculous "statements.".
We all use Facebook to post our thoughts - and now it's time to use it to open our mouths and be heard!
Posted by Carmen at 8:16 AM