A mini-teaching about YHWH’s Promise to humankind 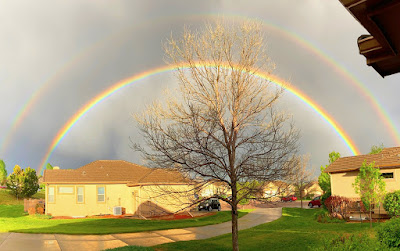 Genesis 9:8 God spoke to Noach and his sons with him; he said, 9 "As for me - I am herewith establishing my covenant with you, with your descendants after you, 10 and with every living creature that is with you - the birds, the livestock and every wild animal with you, all going out of the ark, every animal on earth.
11 I will establish my covenant with you that never again will all living beings be destroyed by the waters of a flood, and there will never again be a flood to destroy the earth."
12 God added, "Here is the sign of the covenant I am making between myself and you and every living creature with you, for all generations to come: 13 I am putting my rainbow in the cloud - it will be there as a sign of the covenant between myself and the earth.
14 Whenever I bring clouds over the earth, and the rainbow is seen in the cloud; 15 I will remember my covenant which is between myself and you and every living creature of any kind; and the water will never again become a flood to destroy all living beings.
16 The rainbow will be in the cloud; so that when I look at it, I will remember the everlasting covenant between God and every living creature of any kind on the earth." 17 God said to Noach, "This is the sign of the covenant which I have established between myself and every living creature on the earth." (CJB)
The rainbow is a beautiful sign from God! But have you ever thought about how a rainbow is formed? My husband, Bill Welker, explains, using a “double rainbow” we recently had the privilege of seeing with our own eyes:
Notice how bright the primary rainbow is. That's because those drops are all at just the right angle (42 deg) from the anti-solar point so that the ray of light reflects/refracts one time in the drop and almost all the light reaches your eye.
Then notice the secondary rainbow. Those drops are all at a higher angle (51 deg) from the anti-solar point, and the light in those drops reflect twice inside the drop so the part that comes out toward your eye is "weaker", so the secondary rainbow is always significantly darker than the primary rainbow.
Note also that the colors in the secondary rainbow are the reverse of the primary rainbow because the refraction is in the opposite direction in the secondary rainbow!
Then notice the "dark" area between the two rainbows. This is called "Alexander's dark band". It appears dark because all the raindrops in that gap are scattering the light AWAY from your eye.
Also notice the area below the primary rainbow - it is brighter! That's because all the raindrops in that area are scattering more light, but of all colors, toward your eye. Since it is all colors, it is seen a white light.
Everyone who sees a rainbow sees a different rainbow than everyone else. Each rainbow is unique to the observer. Each person actually sees two rainbows because a rainbow is formed by each eye. You can't perceive two rainbows because the raindrops are so far away from you that the two rainbows essentially "overlap".
Also, the rainbow is not really there! It is only seen by the eye, and the "bow" is actually a "cone". We can't perceive any "depth" to the rainbow, but the colors you see are actually formed all along a line from your eye to the raindrops at that particular angle.
Any raindrop just a few feet from you, to raindrops miles away are all contributing to the colors you see, as long as the drops are on the same line, and what you see is completely unique to your eyes!
Though it is difficult to see in the photo without enlarging it, running just inside the Primary rainbow is another, very faint rainbow. This is called a supernumerary rainbow and is caused by optical "interference" which we see as colored rings just inside the primary bow.
Supernumerary rainbows are more likely to be seen when the raindrops are mostly all the same size in the direction you are looking.
By describing the rainbow in this manner, I've probably spoiled the rainbow for many, but to me, knowing how it all happens is itself a beautiful thing that adds greatly to the simple beauty of the rainbow.
Posted by Carmen at 1:27 PM