This is why we at The Refiner’s Fire are into Messianic Apologetics! 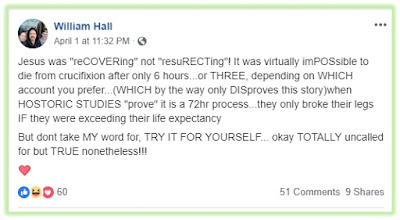 We never cease to be amazed over the arrogance of counter-missionaries (those who have rejected Yeshua as Messiah and are busy bashing him every chance they get)!

It’s mind-boggling that they have a total comprehension problem when it comes to Yeshua and the New Testament; yet, they blindly believe everything written in the Tanach!  We would truly love to have a Jesus-rejecter explain the following: How can you make a vile, ignorant, moronic and disgusting comment such as the one in this screen shot above, while at the same time believe that:


1. God created the entire universe and everything in it, including man whom He made from the dust of earth.

2. God flooded the earth, killing everybody except Noah and his family – who started mankind all over again.

3. God sent ten plagues who show Pharoah who was boss; and then he caused the sea to part, allowing only the Israelites to pass through, while basically wiping out all the Egyptians who followed in hot pursuit.

4. God supernaturally clothed and fed six million people wandering in the wilderness for 40 years – all while leading them via pillars of cloud and fire. How was THAT possible?

5. God saved from a fiery furnace thee men who went INTO the furnace (Shadrach, Meshach and Abednego and a fourth person “who looked like the son of man”)…

6. Elijah ran faster than a chariot and was fed by Ravens. How was that kosher?
7. Jonah spend the night in a whale’s stomach and lived.

Surely, you get the gist….

But, please don't patronize us by trying to suggest that you KNOW those things are true because "they were passed down to you by the Rabbis and sages!" Sorry, but that doesn't hold water! The Rabbis and sages were mere men who - like YOU - weren't personally present at Mt. Sinai, so ALL we really have is FAITH and hearsay!

Notice, I said FAITH? That's what believers in Yeshua have!

It is beyond sad, and extremely childish, evil and sickening for ANYONE to make comments such as the ones made by William Hall in this screen shot. This reveals that - unlike some Jewish Rabbis and scholars - this guy doesn’t even believe that Yeshua existed at all. (Even MUSLIMS believe that he did!)

SHAME on William Hall and all who participated in his sickening tirade to bash the One who shed his blood on our behalf. It is a kick in YHWH’s Face! And SHAME on all the Rabbis who allow themselves to be interviewed by someone as vile as he is! What he wrote truly shows how far he is willing to go to gain followers and get "likes"....

Unless William Hall is an expert on the analogy of crucifixions, he has NO RIGHT to suggest what Yeshua went through before he died, or how long it took him to die. I guess it's never occurred to Hall that perhaps ADONAI Himself spared His own SON from anymore agony than was necessary? Here is what the Aramaic says:

Matthew 27:46. And about the ninth hour, Y’shua cried out with a loud voice and said, My El! My El! [Lemana shabakthani] Why have you spared me?[1] 47. And some of those men who were standing there when they heard it were saying, “This man calls to Eliyahu.”

48. And immediately, one of them ran and took a sponge and filled it with vinegar and put it on a reed, and was offering a drink to him.[2] 49. But the rest were saying, “Let him be. Let us see if Eliyahu comes to save him.”

50. Then again Y’shua cried out with a loud voice and gave up his spirit. 51. And immediately, the curtains at the door of the temple were torn in two from the top to the bottom. And the earth was shaken and the rocks were split.

52. And the tombs were opened and many bodies of the Set Apart believers[3] who were asleep arose, 53. And went out. And after his resurrection, they entered into the Set Apart city and were seen by many. (AENT)

[1] Y’shua was not necessarily quoting Psalm 22, although the imagery of the Psalm is certainly intended by Matthew. Greek is transliterated Eli, Eli lama sabacthani, but Peshitta and Psalm 22 read: Eli, Eli lama azbatani. Many Bibles read “forsaken” from which came a false teaching that the Father left Y’shua destitute (Marcionite thinking).

Isaiah 53:4 indicates that “we” reckoned him smitten of Elohim, but it is not YHWH who tortured His own son, but men motivated by religious tradition. Psalm 22 references those who scorned Y’shua for his Faith in YHWH and called him a worm (detested), but Father YHWH does not forsake the righteous, nor does He at any time “forsake” His own Son – see Psalm 9:9, 10; 37:25; 71:11; Isaiah 49:14-16. Y'shua says "Eli" (my El). He is in great physical pain after being brutally tortured; those around him were confused about whether he was saying "Eli-yah" or "Eliyahu".

If Hebrew eyewitnesses were not sure of what he was saying, it shouldn’t be a surprise that Greek transliteration was also wrong, putting "lama sabacthani" rather than "lemana shabakthani". Perhaps the reason Y’shua says "why are you sparing me" is because he has proven his commitment by laying down his life and has already endured about six hours of the execution!

So, it’s not a matter of being "forsaken" but that he literally means, "Father, I'm ready, why can’t we finish this?" In a matter of moments from saying this, he dies, which fully supports this interpretation.

[3] Being “Set Apart” unto YHWH, means to be led by the Ruach haKodesh to keep the Commandments of YHWH. Belief in itself does not make one Set Apart; even the demons “believe” in YHWH and His Mashiyach (Ya’akov [James] 2:19).
Posted by Carmen at 5:55 PM