Taking on a counter-missionary’s comments 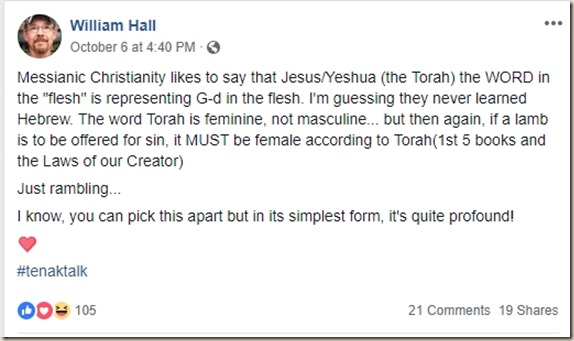 Oh my, this guy thinks he has ALL the answers, doesn't he?  Yeah…we sure can pick it apart!

There are many Commandments that establish clear gender recognition, which shows distinct honor to both genders while upholding the Creator's male and female characteristics. Clearly YHWH has chosen to reveal Himself as a Father with a predominately masculine identity, but He also reveals Himself through both male and female spirits.

The fact that He chose to send his SON (arm) to earth has NO bearing on the fact that Yeshua was also the Word!

We do hope Jews are not actually taught the things William Hall espouses, as it is downright false to suggest that the lamb for sin offering HAS to be female! If that's the case,then why in Exodus 12, for the preparation for the one-and-only original "pass over", does it say:

Exodus 12:3 ...On the tenth day of this month, each man is to take a lamb or kid for his family, one per household - 4 except that if the household is too small for a whole lamb or kid, then he and his next-door neighbor should share one, dividing it in proportion to the number of people eating it.

5 Your animal must be without defect, A MALE in its first year, and you may choose it from either the sheep or the goats. "'You are to keep it until the fourteenth day of the month, and then the entire assembly of the community of Isra'el will slaughter it at dusk.

Be that as it may, the Passover offering was NOT a "female" and we read in verse 6 that the animal is not sacrificed, but killed. (Yeshua wasn't sacrificed - he martyred himself, against which there is NO LAW!

Additionally, it's not a correct that a sin offering must be a female animal because we see throughout Torah that atonement for sin is not so much the sex of the animal, rather what animal is required for the person or group or sin being atoned. (Leviticus 4:23 - a bull for a Cohen; Leviticus 4:13 - a bull for the entire community; Leviticus 4:22 - a male goat for a "leader", etc.)

And in Leviticus 5:7, we learn that if a person can't afford a lamb, two doves or pigeons can be substituted! And, as we see in Leviticus 5:11, YHWH is even willing to accept from those who can't afford even a bird: "two quarts of fine flour for a sin offering"....

Leviticus 5:11 "'But if his means are insufficient even for two doves or two young pigeons, then he is to bring as his offering for the sin he committed two quarts of fine flour for a sin offering; he is not to put any olive oil or frankincense on it, because it is a sin offering.

And look at this:

Leviticus 12:8 If she can't afford a lamb, she is to take two doves or two young pigeons, the one for a burnt offering and the other for a sin offering; the cohen will make atonement for her, and she will be clean.'"

As is clearly evident when read in context, the "female lamb" is not the point! Yes, Leviticus 4:32 says a female lamb, for an individual's sin; but 4:28 says a female goat instead, for an individual's sin. When the Cohen sinned inadvertently, or the entire community sinned inadvertently, a male animal was used for atonement! (See Lev 4:1-4; 4:14; all the sin offerings for the clans in Numbers 7:12-87, the sin offerings of Numbers 28, to mention a few).

And by the way, the use of the word "lamb" for the Messiah is entirely metaphorical. His substitution was for all, so it is appropriate that he was male, as the lamb of the original passover was a male.