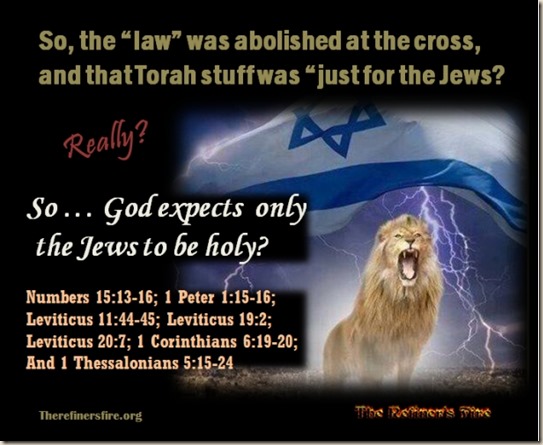 Deuteronomy 29:29 "Things which are hidden belong to ADONAI our God. But the things that have been revealed belong to us and our children forever, so that we can observe all the words of this Torah. (CJB)

Do you get it? WE are responsible for everything ADONAI taught and revealed to us through His Word!

Please take a closer look at that second sentence: “….the things that have been revealed belong to us and our children forever, so that we can observe all the words of this Torah.”

This train of thought (about observing all the words of YHWH’s Torah) is repeated over and over again, throughout the Torah, and drawn like a taut bow string throughout the rest of Scripture, all the way into the Gospels where we see Paul saying: “Do we then nullify Torah by faith? May it never be! On the contrary, we establish Torah.” (Romans 3:31)

Many attempt to use the excuse that those “original 613 commands” don’t pertain them because they were “just for the Jews.” While it might be true to an extent that all “613” weren’t meant for everyone (most were for the priests of the day; some were only for men, some only for women, and some only for a certain time frame), there were some that meant for ALL and “forever”. Please see our article.

It is ludicrous to think that Torah was meant only for the Jews because, without YHWH’s Torah, the world would have NO blueprint for moral, holy living! YHWH is THE CREATOR!

YHWH repeated four times in a row in Numbers 15:13-16 that ALL who accept Him as their ELOHIM are to do exactly as HIS people do, and that He does NOT differentiate between His “natural and adopted children.”

Furthermore, since we are “one in Messiah” (Galatians 3:28, Romans 12:5) WHY would He have different rules for different people – especially since "Yeshua the Mashiyach is the same yesterday, today and forever”? (Hebrews 13:8)

NOTE: When Paul wrote those words, he knew Yeshua as Mashiyach/Messiah and “the Word of YHWH” who is the same yesterday, today, and forever; and that all things were created by the Word of YHWH from the beginning of time.

Yeshua, as the "arm of YHWH" (Isaiah 53:1) is inseparable from his Father. He was made flesh, in part, so that he could be "born and die" (YHWH cannot die!) and because of this, he was able to martyr himself as our Final SIN Sacrifice. (John 1:1, 14).

BOTTOM LINE: To ignore Torah is a huge mistake because, if you’re not obeying YHWH’s Rules, whose rules are you obeying?