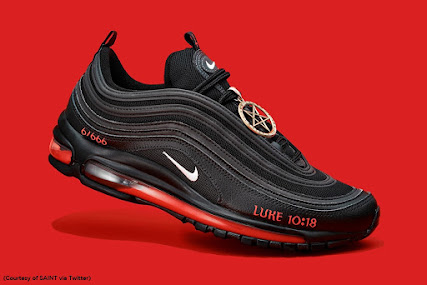 Introducing – Satan shoes!  Yep, the shoes, which contain a drop of human blood in the sole, went on sale Monday for $1,018 per pair. They are decorated with a pentagram and a reference to Luke 10:18, a Bible verse about Satan's fall from heaven. Only 666 pairs were made available, and all were sold out shortly after going on sale.

Here are a couple of links for you to check out.


MY RESPONSETO THIS SILLY NONSENSE:

We’re in the end times, people, and there is clearly a HUGE fight going on behind the scenes in the spiritual world.  Satan KNOWS how The Book ends … which is why he is coming on so hard. Unfortunately, most of the world seems to be flocking to him.  Matthew 7:13-14 confirms that truth.

Anyway, the "rapper" who created these shoes, clearly doesn't know how THE BOOK ends. (That's because he, like most of the world, hasn't read the Bible from cover to cover!) His "god" does NOT win! His "god" is a mere CREATED being - someone who used to be the "head angel" .... the most beautiful angel in heaven.

Luke 10:16. And whoever listens to you listens to me, and whoever rejects you, he rejects me. And whoever rejects me rejects Him who sent me. 17. And those seventy whom he had sent out returned with great joy and said to him, “Our Master, even demons were subject to us by Your name!” 18. And He said to them, I did see Satan falling like lightning from heaven. 19. Behold I give authority to you to tread on snakes and scorpions and all the power of the enemy, and nothing will harm you. 20. Nevertheless, do not rejoice in this that demons are subject to you, rather be glad that your names are written in heaven.  (AENT)

(NOTE: Y’shua has authority in and by his Father’s Name YHWH.  This, then, does not refer to his name according to his humanity, but the power of the promise in his name (YHWH is salvation), the same name as the Father’s (John 17:11).)

I don't know why that "rapper" is so thrilled about Luke 10:18, because that whole passage, in CONTEXT, reveals that anyone who is NOT bound for heaven, has NO CLUE what they are in for!

Satanists and other unbelievers, let's examine that passage, shall we?

"And whoever rejects me rejects Him who sent me." The "Him" who sent Messiah Yeshua is the SAME "Him" who created the smart alecky Lucifer, who got too big for his britches and was kicked OUT of heaven for trying to usurp YHWH's power!

“Our Master, even demons were subject to us by Your name!” The demons need to pay VERY close attention to that, because EVERY KNEE will bow when he returns! (Philippians 2:10-11) Do you realize the implication of that? Just in case you don't, let's read the following passage together:

Matthew 8:28 When Yeshua arrived at the other side of the lake, in the Gadarenes’ territory, there came out of the burial caves two men controlled by demons, so violent that no one dared travel on that road. 29 They screamed, “What do you want with us, Son of God? Have you come here to torture us before the appointed time?” 30 Now some distance from them a large herd of pigs was feeding.

31 The demons begged him, “If you are going to drive us out, send us into the herd of pigs.” 32 “All right, go!” he told them. So they came out and went into the pigs, whereupon the entire herd rushed down the hillside into the lake and drowned. 33 The swineherds fled, went off to the town and told the whole story, including what had happened to the demonized men. 34 At this, the whole town came out to meet Yeshua. When they saw him, they begged him to leave their district. (CJB)

You don't mess with Yeshua, buddy!

Back to Luke 10 - and pay really close attention here, because the hidden message for the lost and those who worship YHWH's Adversary is that they will undergo pain and terror like they've never imagined.

20. "Nevertheless, do not rejoice in this that demons are subject to you, rather be glad that your names are written in heaven. "

Well, that's an easy one:  Take on YHWH and GUESS WHO WINS!

In response, this sick "rapper" (calling himself Lil Nas X) made a video that LOOKS like he's going to make an apology for this shoe - but a few seconds into it, he can be seen giving a LAP DANCE to satan. I kid you not! All one can do about disgusting kooks like this is to turn them over to YHWH. Not even Yeshua himself tried to fight demons like this. He simply quoted Torah and Psalms....

Isaiah 5:20 Woe to those who call evil good and good evil, who put darkness for light and light for darkness, who put bitter for sweet and sweet for bitter! (ESV)

Psalm 64:1-10 To the choirmaster. A Psalm of David. Hear my voice, O God, in my complaint; preserve my life from dread of the enemy. Hide me from the secret plots of the wicked, from the throng of evildoers, who whet their tongues like swords, who aim bitter words like arrows, shooting from ambush at the blameless, shooting at him suddenly and without fear. They hold fast to their evil purpose; they talk of laying snares secretly, thinking, “Who can see them?” ... (ESV)

Psalm 34:16 The face of YHWH is against those who do evil, to cut off the memory of them from the earth