I recently took this “screen shot” from the Facebook wall of Olivier Melnick, Training Director of “Chosen People Ministries.  This ministry comes across as being Messianic; but is, in fact, Christian - with an agenda to lead Jews to reject YHWH’s Torah (Divine Instructions in Righteousness). 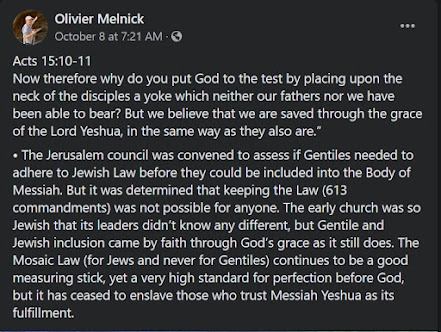 When I first saw this, I was gripped by a plethora of emotions, that ranged from extreme sadness for the LACK of Bible knowledge this teacher has; to outright anger over the fact that his ministry comes across as “Messianic” and pro-Israel when, in reality, it is Christian in disguise, with an agenda of leading people (be they Christian or Jewish) to their “New Testament only” theology!

Here is an excerpt from their Mission Statement:

“Chosen People Ministries serves in eighteen countries across the globe. Our outreach programs include evangelism and discipleship, Messianic Centers and congregations, equipping the local church for Jewish evangelism, digital evangelism through our ‘Isaiah 53 Campaigns’ and ‘I Found Shalom’ videos, and benevolence work. With your help, we will continue proclaiming the Good News through Jesus the Messiah to Jewish people around the world.”

FIRSTLY: The “Good News” was never the Gospel by itself! While certainly the most important person in the history of humanity WAS Yeshua (the person Christians call “Jesus”); he was NOT THE ONLY “Good News.”

The “Good News” consisted of the things he taught: The Kingdom of YHWH (Luke 4:43), and to advance Torah (Matthew 5:20) as our standard for living. Without Torah, we cannot be righteous and there would not have been any need for Messiah Yeshua, for he would not have had anything to teach! Yet, “the church” keeps on teaching the destruction of Torah with their insistence that it was “just for the Jews” and never pertained to the Gentiles….

In other words, what Christianity is inadvertently teaching is that God expected only the Jews to be holy!  They are teaching that Christians are already holy “because Jesus died for us.”  If they would only study the Torah and read the words of both Yeshua and Paul in their proper Torah contexts, they would discover that there is more to “being holy” and “being saved” than mere “belief in Jesus!”

SECONDLY: NOBODY ever said that ALL had to keep those 613 Laws (which, by the way, MAN numbered). You won’t find that ANYWHERE in the entire Bible – not ANYWHERE!  MOST of those rules were originally for the Levite priests; while some were only for men and some only for women, yet some are for all.

(For instance, there would have been NO reason for MEN to obey the niddah/”live outside the camp for 7 days” rules concerning menstruation! Simple common sense, right? Yet, somehow the simplest things have escaped the Christian “scholars”….)

Do you see what I’m getting at? Mr. Melnick is teaching that Torah means nothing; that it was BAD and abolished at the cross. Look at the last sentence of the screen shot. “…The Mosaic Law (for Jews and never for Gentiles) continues to be a good measuring stick….but it has ceased to enslave those who trust Messiah Yeshua as its fulfillment.”

Whoops – what? “Mosaic Law?” Did Moshe/Moses make up these rules on his own? NO, they were YHWH’s Rules! Moshe simply wrote down EVERYTHING YHWH commanded him to write! See for yourself:

Exodus 24: 1 To Moshe [ADONAI] said, "Come up to ADONAI - you, Aharon, Nadav, Avihu, and seventy of the leaders of Isra'el. Prostrate yourselves at a distance, 2 while Moshe alone approaches ADONAI -the others are not to approach, and the people are not to go up with him." 3 Moshe came and told the people everything ADONAI had said, including all the rulings. The people answered with one voice: "We will obey every word ADONAI has spoken."

4 Moshe wrote down all the words of ADONAI. He rose early in the morning, built an altar at the base of the mountain and set upright twelve large stones to represent the twelve tribes of Isra'el. 5 He sent the young men of the people of Isra'el to offer burnt offerings and sacrifice peace offerings of oxen to ADONAI. 6 Moshe took half of the blood and put it in basins; the other half of the blood he splashed against the altar. 7 Then he took the book of the covenant and read it aloud, so that the people could hear; and they responded, "Everything that ADONAI has spoken, we will do and obey." (CJB)

Referencing Melnick’s comment that this “law” was “for Jews and never for Gentiles”: If that’s true, then why did YHWH allow the pagan Egyptians who followed Moshe out of Egypt in the Exodus, to be absorbed into the 12 tribes, and instruct them to do exactly as HIS people did?

One of the most disgusting phrases that Melnick wrote is that the “Mosaic Law…continues to be a good measuring stick….but it has ceased to enslave those who trust Messiah Yeshua as its fulfillment.”

REALLY? So, YHWH’s Divine Instructions to mankind were created to ENSLAVE men? So, YHWH rescued the Hebrews from Egypt so He could ENSLAVE them with His “silly Torah commands” – the very commands that made the people HOLY and offered them eternal life? Those very same SILLY laws (instructions/teachings) that YESHUA used to teach?

Give me a break!  What a kick in the faces of YHWH and Yeshua! What blasphemy!!! SHAME on people who teach such blasphemy!

Even this comment of Melnick’s is ridiculous: “The early church was so Jewish that its leaders didn’t know any different, but Gentile and Jewish inclusion came by faith through God’s grace as it still does.”

It was “so Jewish?” Well, pardon us, Mr. Melnick, but YHWH (THE CREATOR of the entire universe!) commanded the Tribe of Judah to take Torah into the world and safeguard and preserve it (Genesis 49:10, Micah 4:2)! He was VERY adamant about HIS people being HOLY.

Matter of fact, He was SO adamant about keeping them away from paganism (such as is rampant in today’s churches!) that He used to command HIS people to go into pagan cities to KILL every man, woman and child – and even the poor innocent animals, as they had also been indoctrinated into living in paganism…. (See Genesis 7:23.)

It is extremely depressing to know that Christians are teaching this stuff – acting as if Torah was a BAD thing that shouldn’t exist! They are, in essence, suggesting that our ELOHIM was some dummy who didn’t know what He was doing, as His Torah was (according to Christianity) “enslavement” – and that, He ultimately sent His Divine Son to ABOLISH it.  In other words, Christians don’t have a clue as to WHY Yeshua actually came….

What Olivier Melnick wrote was spawned through raw ignorance of Scripture! May YHWH forgive him and open his eyes to HIS Truth, so that he (Melnick) can repent and correct himself and his wayward teachings.