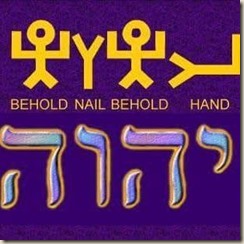 So, BE CAREFUL about everything you see, read or hear! Please don't allow yourself to be sucked in by self-proclaimed, armchair "experts" who serve to do nothing more than to lead you away from YHWH's Truth!

For instance, there's a "teaching" here on Facebook that suggests YHWH's Name supposedly means "Behold hand, behold nail" - and they post the attached meme to "prove" it.