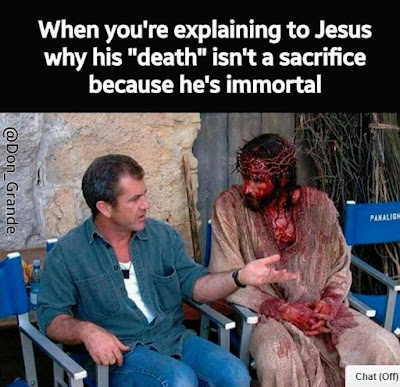 The the type of "arrogant and puffed up" behavior exhibited in the above meme is a perfect example of what YOU will become if you allow the Jewish Rabbis and their converts to lure you away from the whole of YHWH's Truth concerning Messiah Yeshua. If that's who you want to be, go for it, but just remember, there IS a Judgment Day when you WILL get to explain to Yeshua why you - a mere ignorant human with a limited mindset - believed you were smarter and better than YHWH's Divine Messiah.

Whoever created this meme was too dense and stupid to realize that HUMANS are NOT immortal. Yeshua's HUMAN BODY was mortal, but hIs Divine Nature has always existed, and still exists today. Unlike the eternal "nature" of Yeshua - who was Word (John 1:1 and 14), and the "Arm" (Isaiah 53), which is a part of the "body" of YHWH, who has no beginning nor end, the creator of this meme will NOT exist eternally!

On Judgment Day, right after the creator of this meme discovers from God Himself what a HUGE mistake they made due to ignorance, pride and arrogance, they will simply be gone, as if they never existed. Too bad so sad. (Wonder what will happen to the counter-missionary Rabbis who made their living on earth by luring people away from Yeshua?)

Hebrews 10: 28. For if he who transgressed the Torah of Moshe, died without mercies at the mouth of two or three witnesses; 29. how much more, do you think, will he receive capital punishment who has trodden upon the Son of Elohim and has accounted the blood of his covenant by which he is sanctified, as the blood of all men and has treated the Spirit of grace in an insulting manner? (AENT)

Acts 5: 32 And we are witnesses of these words and the Ruach haKodesh; He Who Elohim gives to those who obey Him. (CJB)

The bottom line is, this whole issue is called "defiant irreverence" - a term that can be applied to such sins as cursing YHWH or willfully degrading things relating to Him, or attributing some evil to Him, or denying Him some good that should be attributed to Him. The "rest of the story" (sadly referred to as "The New Testament" as if it somehow replaced "the old") TELLS us all about YHWH's Divine Mashiyach. It is a grave sin to reject HIS Truth....