Thoughts on one of the most recent counter-missionary videos 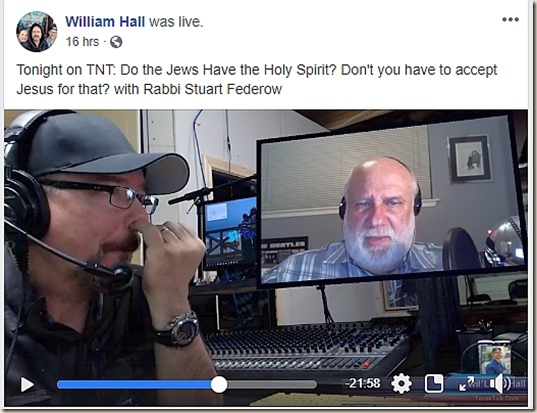 I usually don’t bother listening to William Hall’s Jesus bashing videos, because I find them boring, elementary and downright laughable. The only interesting (albeit it, weird) thing about this particular segment was when Rabbi Stuart Federow broke into the song, “Feelings”… (which was, of course, designed to poke fun at Christians for believing in what he believes is a myth).

William Hall (who boasts that he used to be a tongue-talkin’ Christian who was “Messianic for about 5 years” and has “over 500 videos, over a thousand … fifteen-hundred … hours of teachings against these topics that they try to support…”)  likes to mention ad nauseum that the “Shekinah is feminine."  (By the way, Rabbi Federow insists that Shekinah does not mean “Holy Spirit”; rather, the “Spirit of Holiness that is the revelation from God.”)

Whatever the Shekinah is, Hall's repeat teachings on both it, and the word “Torah” (which he has mentioned in previous videos) are somehow supposed to prove that Jesus is a fake and the New Testament is a myth….

The gist of this particular levity-filled teaching was that the Shekinah of God (which is FEMININE) somehow impregnated Mary - a comment that elicited guffaws from both men. The thing is, anyone who has ever taken Hebrew (or any other language) classes learned early on that grammatical gender is NOT the same as biological gender! In the second day of Hebrew class, pupils learn that inanimate things have grammatical gender….

What does that mean? It means that you CAN'T ASSIGN a sex to the Shekinah, as Federow jokingly suggested! I’ll explain in a moment, but first I want to clarify something:

The thing that probably most of Hall’s audience isn’t aware of, is the fact that he and Rabbi Federow are approaching this entire topic NOT from a Torah or Bible standpoint; rather from a strictly kabbalistic one. (This means, most likely, my argument will be irrelevant to them – but I intend to provide it, anyway, because somebody HAS to mention for the open-throated gullibles what the Bible says.

According to my friend, Rabbi Shmaryahu Lehtimaki (congregation leader of Beit haSha’ar Messianic Fellowship Inc.), from a kabbalistic definition, Federow and Hall are correct... but kabbalah is purely mystic; it is the belief that Scripture is inspired - not only in its obvious interpretations, but to the degree that, through the use of mystic interpretation, one could find hidden meaning in the very numerical and alphabetical interpretation of the texts. While true in some aspects, it is mostly subjective and hyperbole.

Lehtimaki writes, “There are many rabbinical Jews that believe as I do, in that I denigrate Kabbalah as backward, superstitious, and marginal. Kabbalah, in my opinion, has led more Jews to secularism than the reform and reconstructionist movement.

“Kabbalism is not a religion, it leads to humanism in my opinion. It would be better described as a discipline of mystical and scriptural theosophy. Kabbalists comprise but a small fraction of orthodox Jews and using their teachings is not a foundation for argument of scripture and Hebrew grammar.”

So, there you have it. And this is why Rabbi Federow actually sat there and tried to say that words change meaning and now gender means “biological plumbing” (his exact words)... So, apparently forks being masculine in Spanish but feminine in German and Italian has some biological meaning?

Let’s take a logical look at this issue:

While, Hebrew and Aramaic grammar is certainly difficult, there is often no rhyme or reason for a word being masculine or feminine.  Let’s use John 1:1 as an example.

John 1:1. In the beginning[1] was the Miltha[2].  And that Miltha was with Elohim.  And Elohim was that Miltha.  2. This was with Elohim in the beginning.[3]  3. Everything existed through his hands,[4] and without him, not even one thing existed of the things which have existed.  4. In him was life, and the life was the light of men.**  5. And that light shines in the darkness, and the darkness did not overtake it.[5] (AENT)

[1]   The phrase B’resheet aytohi hwa miltha breaks a most basic rule of Aramaic grammar by combining a feminine noun (miltha) with two masculine verbs for “to be” (aytohi, hwa).  This is unheard of in Aramaic literature other than right here in this passage and in 1 John.  This shows YHWH has male and female “images/spirits” even though YHWH remains a He.  It may also be a midrash on Isaiah 11:1-2, which describes the Spirit of YHWH descending on Mashiyach using both masculine and feminine suffixes. This is not something easily translated, let alone when it occurs within the first four words.

[2]   Miltha has no direct English equivalent. It can mean ‘Word’, ‘Manifestation’, ‘Instance’ or ‘Substance’ among other things. In this context, it may best be left untranslated.

[3]   Fulfilling Messianic prophecy: Mashiyach (ruler of Israel) to have origins of the ancient past Micah 5:2; Isaiah 48:16. Bear in mind that Micah is referring to the spiritual “Israel of Elohim,” those of the Kingdom of Heaven according to the circumcision of heart.

{5]  Aramaic wordplay.  Nohra b’chashokha menhar (light in the darkness that shines) is a deliberate mirror-reversal of menhar-nohra (menorah), which marks the conception of the light of the world at Hanukkah.  This puts the birth of Mashiyach nine months from Hanukkah, during the fall feasts; many point to the first day of Feast of Tabernacles for the date of Y’shua’s birth.

In the passage above, according to Aramaic and Hebrew scholars, the phrase B'resheet aytohi hwa miltha, breaks a most basic rule of Aramaic grammar by combining a feminine noun (miltha) with two masculine verbs for "to be" (aytohi, hwa).

This is unheard of in Aramaic literature other than right here in this passage and in 1 John!

This shows ADONAI has male and female "images/spirits" even though ELOHIM remains a “He”. It may also be a midrash on Isaiah 11:1-2, which describes the Spirit of YHWH descending on Mashiyach using both masculine and feminine suffixes. This is not something easily translated, let alone when it occurs within the first four words.

If Rabbi Federow and the podcast host William Hall would read the Bible in context, they would discover that, while Yahweh might have male and female "images/spirits" He is ALWAYS referred to in the MASCULINE gender - as is His Son!

In Hebrew, the Shekinah, the manifestation of God's presence that fills the universe (Shekinah), is conceived of in feminine terms, and the word Shekinah is a feminine word. But that does NOT make our Creator OR His Son female!

So, what did William Hall’s interview with Rabbi Federow really prove?