If you encounter Jewish counter-missionaries who bash Jesus, SAY something; don’t remain passive

The explanation for my meme below is this: Counter-missionaries are sitting around on Facebook and elsewhere, bashing and trashing YHWH's Messiah on a daily basis - and hardly anyone bothers to refute them, even if simply to say, "You guys are committing blasphemy!"

These "counter-missionaries" are following the teachings of Jewish rabbis and their converts who are making their living writing articles and making videos and radio podcasts designed to berate Messiah Yeshua and the entire New Testament.

There is perhaps a handful of people (including myself) who yell "STOP!" and try to show these Jesus-haters how and why they are off the mark - even though it usually does no good, because Jesus haters REFUSE to see God's Truth, and it's clear they actually WANT to sit around with their own kind to commit vicious gossip about the one who martyred himself on our behalf.

And yes, it's VERY hard to discuss Scripture with "them" because - instead of rational discussion, they ALWAYS resort to sarcasm and character assassinations of the ones trying to defend Yeshua - most often in very vile and mean-spirited ways.

YES, it's hard to try to defend Yeshua in those viper pits (on Facebook and in the comments sections on their blogs, videos or podcasts), but someone HAS to speak up for him, so that those who are being pulled away from him because of counter-missionary teachings can KNOW that these folks do NOT have all the answers, and that by "rejecting Jesus" (as counter-missionaries like to call it) they are making the biggest mistakes of their lives.

What we need to remember is, we're talking about YHWH's MESSIAH who died for us, who is being systematically bashed and trashed and basically re-crucified on a daily basis! So, WHY can most NOT be bothered to speak up in defense of him? One truly has to wonder if people would just sit on the sidelines and say nothing if it were one of their own family members being beaten up... 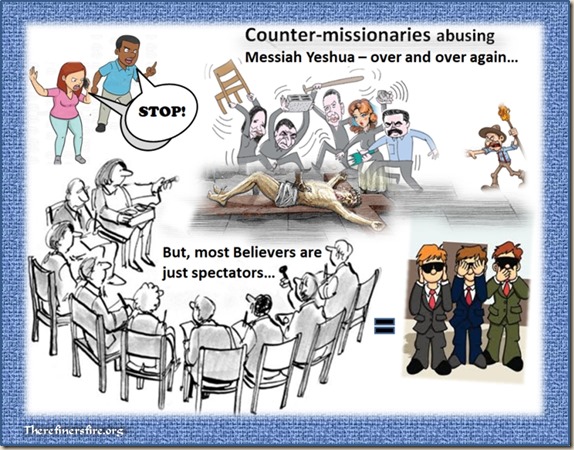