Response to atheists who urge you to “imagine no religion” 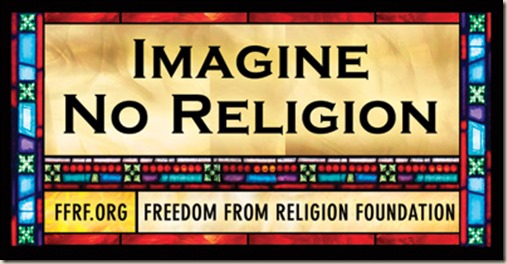 I agree that “religion” is bad.  After all, there are tons of religions – most of which don’t line up with God’s Word – the Bible.

My passion is to lead the world to the Truth of YHWH/Yeshua/Torah. It's NOT easy, because unless YHWH opens someone's eyes, they simply cannot see Him, His Messiah, or His Torah Truth.

Therefore, I normally don't even bother trying to reach atheists anymore because "talking God" with an atheist is like trying to explain the Pythagorean Theorem to a 5-year-old. It simply won't work. But, on those rare occasions when an atheist writes to me through our website, I always use the following angle to make them THINK (and then I simply ask them to read all the articles on our Discussing Atheism page). So, here's my attempt to reach atheists:

More than 300 Bible prophecies have already been fulfilled, with just a few more to go (some of which are foreshadowed in the final three biblical Feasts that Yeshua/Jesus will fulfill.

What are the odds of that? Well, according to mathematician and professor, Peter Stoner, the probability of even just 48 prophecies being fulfilled by one person (referring to Y'shua) is the incredible number of 1 in 10^157 power!

If you're not good in math, please ask someone who is, to explain it to you....

God actually made one of His major end-time prophecies happen in 1948 (and it happened in ONE DAY, just as the Prophet Isaiah foretold [Isaiah 66:7-8]; when the world briefly felt sorry for the Jews because of the Holocaust ... and consequently Israel was returned to them. Yes, God used the rabid and blind hatred of HITLER to make one of His end time prophecies happen!

Anyway, since more than Bible 300 prophecies have come true, what makes you think the last FEW won't? Time is running out, so why are you gambling with the eternal life that He freely offers?