The Silly Attacks on the Star of David

It amazes me the extent to which people will go to discredit or deny Israel. The latest jaw-dropper I encountered is the "Pagan Origin of the Star of David" and how "evil" Israel must be for adopting such a symbol into Judaism! Facebook, that world of high intellect, is awash in how "evil" the Star of David is, presumably admonishing "true believers" to not use it.

Here are a few examples of this vitriol:


“I see a post on "the star of David" and needed to ask ... Have you Studied to show yourself Approved on this? A six-pointed star is in reality a “hexagram” From Wikipedia @ https://en.wikipedia.org/wiki/Hexagram”

“A hexagram (Greek) or sexagram (Latin) is a six-pointed geometric star figure with the Schläfli symbol {6/2}, 2{3}, or {{3}}. It is the compound of two equilateral triangles. The intersection is a regular hexagon.”

“Bill Schnoebelen, a former Satanist, tells us, “To the sorcerer, the hexagram is a powerful tool to invoke Satan.” In fact, the word “hex” -- as to put a “hex” or “curse” on people -- comes from this word.”

“A Masonic book called The Second Mile, an Eastern Star book, reveals that the “six pointed star is a very ancient symbol, and one of the most powerful.” The hexagram is used in magic, witchcraft, sorcery and occultism and the casting of zodiacal horoscopes by astrologers. “It was considered to possess mysterious powers,” says A Concise Cyclopedia of Freemasonry.”

I tried to ask these Internet intellectuals just what they were trying to say and boy did I get blasted!

Well, here's the deal: None of us have any right to challenge Israel's right to use the Magen David (Shield of David/Star to David)! No one knows the true origin of the Magen David in Israel, and even Jewish scholars openly admit it is a relatively recent symbol adopted into Judaism. But they don't "hide" the fact that other cultures also use the 6-pointed star, and that some cultures employ the symbol nefariously. So if Israel adopts the symbol and applies to it a noble meaning - the use of the symbol is in no way tied to any "pagan" origin!

Consider the "cross" in Christianity. It is actually a symbol of a Roman torture and death device! Even Satanists use the upside-down cross in their rituals. Many denominations in Christianity make an effigy of the Messiah hanging from the cross (prohibited in Exodus 20:4), yet I don't see these same Facebook intellects going after Christianity or Catholicism because the "cross" has "pagan origins"! But they don't hesitate to go after Judaism!

Consider the names of the days of the week! Sunday, Monday, Tuesday, Wednesday, Thursday, Friday. They all have ties to pagan roots, names of planets, or names of "gods". Yet I don't see the Facebook intellects attacking the world demanding they change the weekday names to numbers!

Well, here is something you can hang your hat on: In Judaism, the Magen David has significant scriptural and spiritual meaning. Get over it. Here is a very nice meme which makes the point: 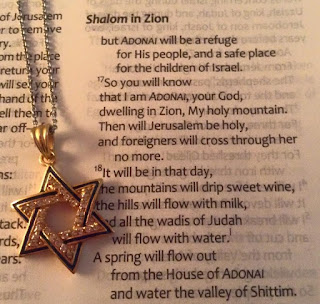 The Magen David gained popularity as a symbol of Judaism after it was adopted as the emblem of the Zionist movement in the late 1880's. When the modern state of Israel was founded, there was much debate over whether this symbol should be used on the flag. Today, the Magen David is a universally recognized symbol of Judaism. It is no more "pagan" than the universal days of the week are today pagan, and all the armchair Facebook experts have no right to challenge it. The Magen David simply represents Israel - and they earned it. Let it go.

For more on the Star of David, without the "occult" and "it's evil" nonsense, here is a short but informative article about the Star of David on The Refiner's Fire.
Posted by Liam at 7:41 PM