The blasphemous comments of a couple of counter-missionaries... 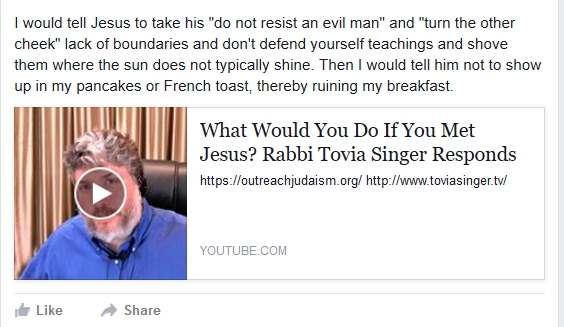 We at The Refiner’s Fire were just made aware of, and are very saddened by the blasphemous comments made by someone who has “rejected Jesus” and is seeking to convert to Judaism.  Take a look at this person’s comments (above) and then watch the short video this person’s thread refers to, where Rabbi Tovia Singer answers the question:  "What would you do if you met Jesus?"


If you don’t have time to watch all 12 minutes of this video, just start watching at 6 minutes in.  What we see here in this video is confirmation that, while Rabbi Singer may be a wonderful person and great rabbi, he has never realized that YHWH never “rescinded” His Torah (as Singer suggests); rather He provided a way for ALL to accept Him and come to know  Him and His “saving grace” during a period in history where there is no Temple and sacrifices cannot be made.  He sent us His Divine Messiah to “proclaim the Kingdom and do everything His Father commanded” (Luke 4: 43, Luke 8:1, Acts 28:23); and as a vehicle to live to gain eternal life in the “new heaven and new earth” (See John: 14:6-10 and Revelation 21:1-8).


YHWH said HE would send a prophet who was to do everything He ordered him to do, so to show such blatant disrespect as the person in the screen shot above and Singer’s comments in the video, is complete blasphemy!


Deuteronomy 18: 15 "ADONAI will raise up for you a prophet like me from among yourselves, from your own kinsmen. You are to pay attention to him, 16 just as when you were assembled at Horev and requested ADONAI your God, 'Don't let me hear the voice of ADONAI my God any more, or let me see this great fire ever again; if I do, I will die!' 17 On that occasion ADONAI said to me, 'They are right in what they are saying. 18 I will raise up for them a prophet like you from among their kinsmen. I will put my words in his mouth, and he will tell them everything I order him. (CJB)


Yeshua Himself said He came to do HIS FATHER's will; not His own!


John 6: 35. Y'shua said to them, I am the Bread of Life. Whoever comes to me will not hunger. And whoever believes in me will not ever thirst. 36. But I have said to you that you have seen me, and you do not believe. 37. All who my Father has given to me will come, and whoever comes not to me I will cast outside! 38. For I came down from heaven,[1] not to do my will, but to do the will of Him who sent me. 39. And this is His will, that of Him who sent me, that all that He has given to me I do not lose even one. 40. For this is the will of my Father, that all who see the Son and believe in Him, will have life that is eternal. And I will raise him up on the last day. (Aramaic English New Testament)


[1] As in the context of Miltha (the Word) or the "Manifestation" or the "Will of" YHWH coming down from heaven to do the Will of YHWH upon earth; his Spirit is of YHWH but his nephesh (soul) and body are human and temporal. This shows that Yeshua was NOT in charge; HIS FATHER WAS!


It is a terrifying thing to fall into the hands of the living God!  We pray anyone who is thinking of “leaving Jesus” will read and memorize the scripture below, because it will mean the difference between life and death on Judgment Day!


Hebrews 10:28. For if he who transgressed the Torah of Moshe, died without mercies at the mouth of two or three witnesses;  29. how much more, do you think, will he receive capital punishment who has trodden upon the Son of Elohim and has accounted the blood of his covenant by which he is sanctified, as the blood of all men and has treated the Spirit of grace in an insulting manner?*  30. For we know him who has said, Retribution is mine and I will repay: and again, Master YHWH will judge his people.  31. It is very terrible to fall into the hands of the living Elohim.  (AENT)

*This admonition is perhaps a midrash about “blaspheming against the Ruach haKodesh” as mentioned by Y’shua in Matthew 12:32.