Those were the now famous words by Pope Francis, uttered July 29, 2013 when, on a plane returning from Brazil, he was asked about gay priests.  "If someone is gay and he searches for the Lord and has good will, who am I to judge?", he said.  With those five words, the Pope trampled the Word of God. 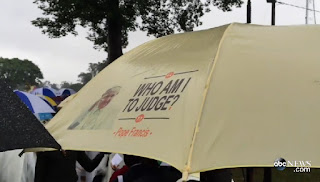 This past week we saw a stark revelation of how far his words reached and how they resonate with the unsuspecting public.  During the Pope's November, 2015 visit to war-torn Africa, what did we see but throngs carrying signs - even umbrellas - emblazoned with his infamous words.

Many will be quick to latch onto the Christian teaching that "you should not judge".  For example, Matthew 7:1-2 is often cited as their defense:

"You should not judge that you be not judged. For by the judgment that you judge, you will be judged. And by the measure that you measure, it will be measured to you." (AENT)

Most interpret these verses and the similar verses in Luke and John to mean that you should not judge.  Period.  But that is not what the whole of scripture says.  If the Pope (and others) would actually read Scripture instead of revising it, they'd see that Yeshua was addressing avoiding judging others by the standard of your own judgment!  YHWH provides for the standard of judgment and we are expected to use His standard when judging others. That standard is Torah! The issue is that we should not judge if we, ourselves are not obeying Torah and are instead judging by our own interpretation of righteousness.

Even Paul understood this simple fact that the Pope seems unable to understand:

1. There is therefore no excuse for you, O man, who judges your neighbor; for by judging your neighbor, you  condemn yourself; for you that judge do practice the same things. 2. And we know that the judgment of Elohim is in accordance with truth, in regard to those who practice these things. 3. And what thinks you, O man, who judges those who practice these things, while practicing them yourself, that you will escape the judgment of Elohim? 4. Or will you abuse the riches of his benevolence, and his long suffering, and the opportunity which he gives you? And do you not know that the benevolence of Elohim should bring you to repentance?  5. But, because of the hardness of your un-repenting heart, you are treasuring up a store of wrath against the day of wrath, and against the revelation of the righteous judgment of Elohim:  6. Who will recompense to every man, according to his deeds.  7. To them who, by perseverance in good works, seek for glory and honor and immortality, to them he will give life eternal. 8. But to them who are obstinate and obey not the truth, but obey iniquity, to them he will return with wrath and fire. (2 Romans 2:1-8, AENT)

Paul taught only what Yeshua taught!  That when you judge others by your own standard of iniquity you condemn yourself.  But the oft ignored corollary is this: When you judge, you should judge only by the standard of truth, and that truth which Paul addressed is, and only is, Torah.

In fact, in our community of God-fearing obedient, we are to hold each other to Torah, and correct someone who errs or strays from Torah!  Here is what the scripture says:

" 'Do not be unjust in judging — show neither partiality to the poor nor deference to the mighty, but with justice judge your neighbor." (Leviticus 19:15, CJB)

" 'Do not hate your brother in your heart, but rebuke your neighbor frankly, so that you won't carry sin because of him." (Leviticus 19:17, CJB)

Again, these verses do not tell us to judge others by our own standard. We are to use YHWH's standard!

YHWH expects His people to be holy and live righteously by Torah, and He provided for a leadership structure for righteous judgment (which the world today has long abandoned):

"Pick for yourselves from each of your tribes men who are wise, understanding and knowledgeable; and I will make them heads over you.' "You answered me, 'What you have said would be a good thing for us to do.'  So I took the heads of your tribes, men wise and knowledgeable, and made them heads over you - leaders in charge of thousands, of hundreds, of fifties and of tens, and officers, tribe by tribe. At that time I commissioned your judges, 'Hear the cases that arise between your brothers; and judge fairly between a man and his brother, and the foreigner who is with him. You are not to show favoritism when judging, but give equal attention to the small and to the great. No matter how a person presents himself, don't be afraid of him; because the decision is God's. The case that is too hard for you, bring to me and I will hear it.'" (Deuterononmy 1:13-17, CJB)

It's no wonder that the Pope would say "Who am I to judge" when he does not understand the standard of judging! Lest you think the "standard" changed, consider Yeshua's own teaching on the subject:

Instead of condoning sin, and hiding behind "who am I to judge", not wishing to "rock the boat", we are to attempt to correct our fallen brothers.  Yeshua said so.  (Read also Ezekiel 3:11-21 about how we are to tell our brothers to turn from their wickedness and if we don't tell them, we are held responsible!)  Correcting our fallen brothers is righteous judging, but it is righteous judging if we apply the proper standard - Torah.  And if we cannot bring our brother back into truth, we are to leave them to their own sin for they have denied YHWH and we've done all we can do.  That is what the Pope should have said for when a brother who sins is rebuked, we are not judging - the judgement is by Torah.

But today, Torah is ignored in favor of "changing the Church" to meet the desires of the people.  How sad that the Church does not teach that it is the people who need to change to bring themselves in-line with the will of YHWH.
Posted by Liam at 1:07 PM