There is a silly meme going around Foolbook which equates the Hebrew word "Gad" to the English word "God" with the implication that "God" means "the Babylonian deity of Fortune".  It is complete nonsense.  Here is the meme: 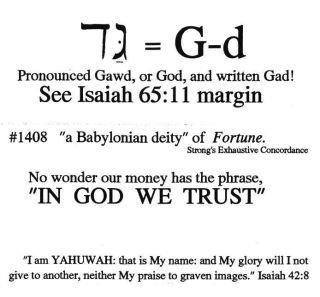 גד, Gad, is the name of the 7th son of Jacob, but we don't see a meme claiming American coinage really carries the phrase "In the son of Jacob we trust"!

ותאמר לאה בגד ותקרא את־שׁמו גד׃ (Gen 30:11)   English: "And Leah said, “With Gad!” So she called his name Gad."   The Strong's number associated with this verse is #1410 "Gad, a son of Jacob, including his tribe and its territory; also a prophet: - Gad".  The Strong's number I see associated with Isaiah 65:11 is #1409 (not #1408) which is taken to mean "fortune".  Thus, Leah named Gad because she saw his birth as a "good fortune" and certainly not as a "Babylonian deity".   In Strong's #1408, "Gad" is taken to mean the Babylonian deity which goes by the name "Fortune",  but look at the whole phrase of Isaiah 65:11 which says  "… who prepare a table for Fortune (Gad), and who furnish the drink offering to Fate (Meni)", clearly a play on words using the names of Babylonian deities to make "fortune" and "fate" into entities for humans to interact with rather than human "conditions".   Indeed, the Stone's Tanach says in a footnote about Isaiah 65:11 "Gad and Meni are either the names of deities (Kara); the planets Jupiter and Mercury (R' Moshe HaKohen); or general names for the stars and constellations (Ibn Ezra).  But the English word "God" in no way refers to any Babylonian deity.

So this meme is simply nonsense.  Shame on the person who created it.
Posted by Liam at 1:48 PM