A word to those who are using abortion as a means of birth control – check out what GOD says! 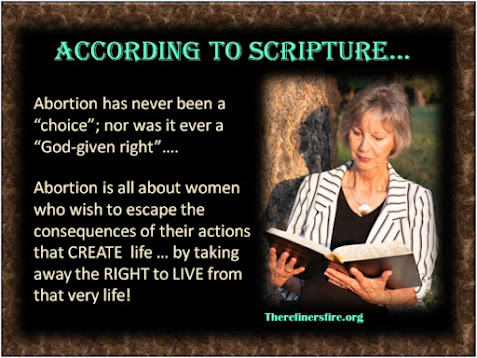 Texas women are in an uproar because a new law in that state bans abortions after six weeks, when a fetus develops a heartbeat.  One of the many memes and signs they are using to protest this law says, "Keep your hands off my body."

Well, truth is, the reason they became pregnant, in the first place, is because they ALLOWED someone's hands on their bodies.  Sex CAUSES pregnancy.  God created "those parts" of our body for procreation....

Another truth is:  Once something has a heartbeat, and is busy growing into a human being, it is NOT "your body!"  It belongs to that little person YOUR actions created that caused THAT body to start growing inside of you!

I'm not trying to be mean or insensitive here, but I'm preaching YHWH's Word, which commands us not to murder.  (Sixth Commandment: Exodus 20:13, "You shall not murder." )

People can make all the excuses they wish about abortion, but the bottom line is that ADONAI is the Creator and HE designed human wombs to grow little human beings. (See Genesis 1:27, Exodus 20:13, Numbers 5:27-28, Psalm 127:3-5.)

Even an ANIMAL that is guilty of shedding human blood MUST die!

ADONAI created everything and everyone for a purpose - and NOBODY has "a right" to KILL "His image!"

For those who believe "it's not a baby until it's born," please check this out: Researchers at Yale University in a published study (July 22, 21006) revealed that they had discovered the very first neurons in a 'thinkin' brain!

"Researchers at Yale School of Medicine and the University of Oxford have identified the very first neurons in what develops into the cerebral cortex, the part of the brain that makes humans human. The findings published in Nature Neuroscience show that the first neurons, or "predecessors," as the researchers called them, are in place 31 days after fertilization. This is much earlier than previously thought and well before development of arms, legs or eyes."

PSALM 139:13 For you created my inmost being; you knit me together in my mother’s womb. 14 I praise you because I am fearfully and wonderfully made; your works are wonderful, I know that full well. 15 My frame was not hidden from you when I was made in the secret place, when I was woven together in the depths of the earth. 16 Your eyes saw my unformed body; all the days ordained for me were written in your book before one of them came to be.

Jeremiah 1:5 “Before I formed you in the womb I knew you, before you were born I set you apart; I appointed you as a prophet to the nations.”

Job 31:15 Did not he who made me in the womb make them? Did not the same one form us both within our mothers?

The bottom line is, ADONAI is our Creator; it is HE and ONLY He who has the "right" and ability to create life or take it away!  NOTHING happens without His approval (including people's "right" to CHOOSE to sin)!

Throughout the Bible we can see how adamant he is about murder and, consequently, in the grand scheme of "HIS WILL BE DONE," women cannot "choose abortion."