Teach the whole Bible? Prepare to be Bashed!

The meme shown here was recently posted in social media nationwide in the course of the (rather pathetic) impeachment circus in the US House of Representatives. Illustrated in the meme is Lt. Col Alexander Vindman, a US Army Officer serving on the National Security Council who testified at the procedings. 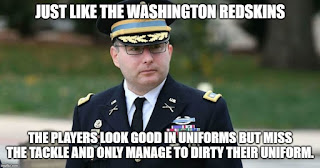 Well, a supposed believer in our Torah-obedient/Messianic faith posted this meme on his FaceBook wall. I dared comment about the meme on his FaceBook page that it was lashon hara (gossip) and that, by posting it, he was complicit – something that is not appropriate for a believer!

We, at The Refiner’s Fire were summarily bashed mercilessly by this supposed godly man! Apparently, he was apparently so incensed at being told he was wrong, all he could do was turn his anger and very expressive vitriol on us … vitriol that included concocting outright LIES about us! Those lies apparently brought him a lot of attention and spawned much discussion by others who “jumped on his lashon hara band-wagon”….

Let’s discuss this meme further, and then you can judge for yourself

The meme is clearly lashon hara, because it not only states an obvious falsehood about the Washington Redskins, but it uses the falsehood to imply (and this is important) without firsthand knowledge, that Col Vindman is “dirty.”  Expressing “gossip” or “hearsay” is lashon hara. Lashon hara is found in Leviticus 19:16; Psalm 34:14 - and is spoken against many times in Proverbs. Therefore, this meme is undeniably lashon hara.

Rather than accepting the rebuke and deleting the meme, this man proceeded to bash and harangue not just me, but both my wife as well on his multiple Facebook profile pages – all of which he uses to his advantage (pretending to be his “friend” who, naturally, supports everything he espouses.)

Was I right or wrong?

That’s actually irrelevant, in the grand scheme of things, because Scripture commands that brethren get along, and to reconcile disputes via the Matthew 18 method – which I employed by telling him directly that, according to Torah, he was committing a sin by perpetuating several things of which he had no first-hand knowledge.

Instead of trying to understand WHY I felt his meme was mere gossip, he proceeded to defend his stance by posting videos and articles by people making the allegation that Vindman had “lied”…. In other words, he failed to comprehend that my objection was to his own lashon hara, not about any of the proceedings in Congress….

We of the faith are told to correct our brothers when they stray:

“You shall not hate your brother in your heart, but you shall reason frankly with your neighbor, lest you incur sin because of him.” Leviticus 19:17

“Whoever heeds instruction is on the path to life, but he who rejects reproof leads others astray.” Proverbs 10:17

“Let a righteous man strike me—it is a kindness; let him rebuke me—it is oil for my head; let my head not refuse it. Yet my prayer is continually against their evil deeds.” Psalm 141:5

There are many, many other verses, but this one was especially applicable:

“As for a person who stirs up division, after warning him once and then twice, have nothing more to do with him, knowing that such a person is warped and sinful; he is self-condemned.” Titus 3:10-11.

This guy…we had dealt with before, and so, we had warned him twice. Then we blocked him and washed our hands of him.  Apparently, our blocking him was the trigger of his blind rage that went on for days – and the things he wrote are simply stunning … things that no TRUE man of God would ever say.

Thus, the purpose of this post: Teach the whole Bible? Prepare to be Bashed! It goes with the territory.
Posted by Liam at 4:12 PM