Tell me again how Jews and their "converts" don't proselytize! 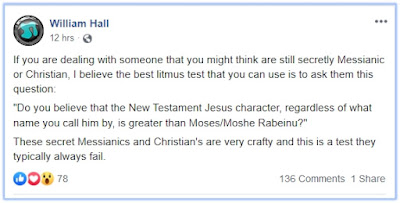 Well, I was born Jewish, AND I am here to say, "YES, Yeshua was definitely greater than Moshe!"

I guess I failed, in Hall's eyes, eh? Too bad so sad. I live to please ELOHIM, not mere men like Hall...

Anyway, how many ways can YOU list to show that Yeshua was and is greater than Moshe? I'll start us off:

While Moshe was certainly great, he was also just a mere human...a human who had the privilege of "speaking face-to-face" with God Himself and who ultimately was responsible for approximately 2 million people. He never performed any miracles on his own; he did what YHWH told Him to. YHWH worked through him - and in the end, He didn't allow Moshe to enter the Promised Land because he failed at one point to give glory to YHWH in front of the people.

Moshe taught Torah to YHWH's people and those who followed Moshe out of Egypt (who were absorbed into the tribes).... a belief system commonly known today as Judaism. Anything that has been added to Judaism (i.e., all the rabbinical, man-made fences) were from the sages and rabbis who came AFTER Moshe.

Yeshua, on the other hand, was totally sinless because he was divine - placed by YHWH Himself into the womb of a virgin. (It would seem to me that when your Father is YHWH Himself, you're automatically "divine"....)

Yeshua worked many miracles (I'd say healing the sick, raising the dead, feeding the multitudes out of practically nothing, turning water into wine and walking on water rank as miracles....)

Once his human flesh died (an event the Jews kicked off in order to rid themselves of this "pest" who got into their faces and tried to get them to stop adding to YHWH's Divine Rules), he rose again to be seen by at least 500 before he was taken into the Heavens to sit at the right Hand of the Father. (That didn't happen to Moshe, or Torah would have mentioned it.)

There are approximately 2.4 billion Christians today, and myriad Messianics/Hebrew Roots adherents...all thanks to YESHUA who came to proclaim the KINGDOM OF YHWH and do everything His Father commanded ... perfectly.